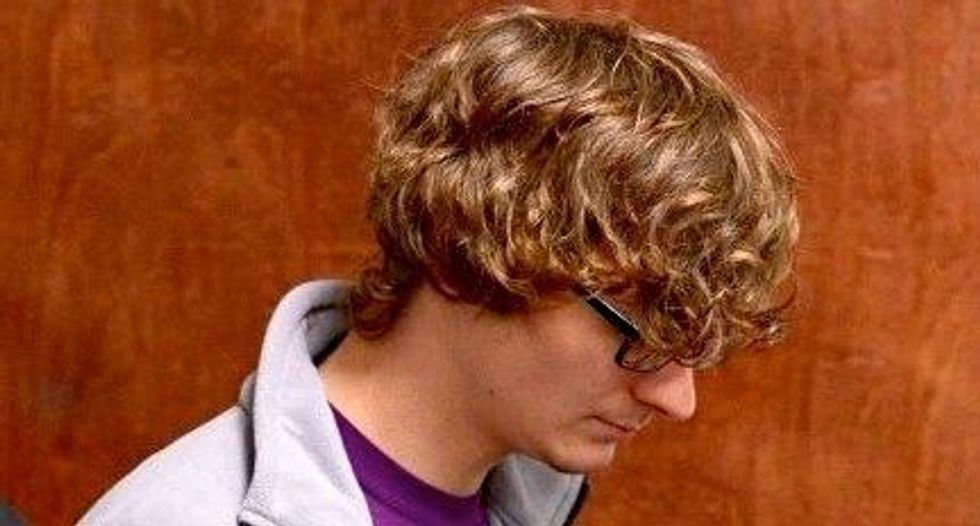 Christopher Leonard (R) appears in court to give a sworn testimony during a felony hearing for his half-sister, Sarah Ferguson in New Hartford, New York October 21, 2015. Leonard's older brother Lucas died after allegedly being beaten for hours during a family counseling session inside the "sanctuary room" of an upstate Christian church, police said on Wednesday. REUTERS/Tina Russell/Observer-Dispatch/Pool

An upstate New York teenager told a court on Wednesday that members of his family and others struck him in the genitals and on other parts of his body during in a brutal attack at a secretive upstate church that killed his older brother.

The testimony by Christopher Leonard, 17, was the first public description of last week's attack by the teenager, who was recently released from a hospital where he was treated for blunt force injuries to most of his body.

Leonard and his brother Lucas, 19, were beaten during a counseling session at the Word of Life Church in Chadwicks, New York, about 50 miles (80 km) east of Syracuse, authorities said.

The alleged assault, which began late on Oct. 11 in the church's "sanctuary room" and lasted more than 10 hours, was initiated because Lucas Leonard wanted to leave the congregation, District Attorney Scott McNamara said.

The teenager's testimony came during a hearing for his half-sister Sarah Ferguson, 33, in New Hartford Town Court. He spoke quietly in court and kept his head down while answering questions from attorneys.

He said the church's pastor, Tiffany Irwin, organized the counseling session and asked the boys questions. He did not elaborate on the nature of the questions.

Initially, the brothers answered the questions willingly but when they began to resist, the meeting turned violent, he said.

The teenagers' parents, Bruce Leonard, 65, and Deborah Leonard, 59, have been charged with first-degree manslaughter in the death of Lucas Leonard. They are being held at Oneida County Correctional Facility in lieu of $100,000 bail.

Ferguson is charged with assault in the second degree in the beating of Christopher. She is being held at Oneida County Jail in lieu of $50,000 bail.

Parishioners Joseph Irwin, 26, Linda Morey, 54, and David Morey, 26, are also charged with second-degree assault in connection with Christopher Leonard's beating. They have been released after posting $50,000 bonds.

The teenager said he did not fight back during the beating, in which a "whip" made of an electrical cord was used. Instead, he said, "I held out my hands to stop the whip."

The teenager was restrained at one point during the beating, he said, without specifying whether he was tied up or held down by one of the alleged assailants.

Near the end of the ordeal, Christopher Leonard said he was forced to wear ear plugs, ear muffs and was placed in a corner facing away from his brother. When he eventually turned around, he saw his brother lying on the ground and apparently not breathing.

The teenagers were eventually loaded into two vans, he said. Lucas Leonard was taken to a nearby hospital, where he was pronounced dead. Christopher Leonard was also driven to the hospital by unnamed parishioners, but the group decided at the last-minute to skip the hospital and instead take him back to the church, he testified.

Authorities transported Christopher Leonard to the hospital after finding the teenager on the second floor of the church during their investigation of Lucas Leonard's death.

The defendants are scheduled to appear again in court on December 15.

Outside of the courtroom, McNamara said he was seeking a grand jury indictment of the Leonards. He was also presenting evidence to the panel that could result in new arrests and additional charges against those already arrested.