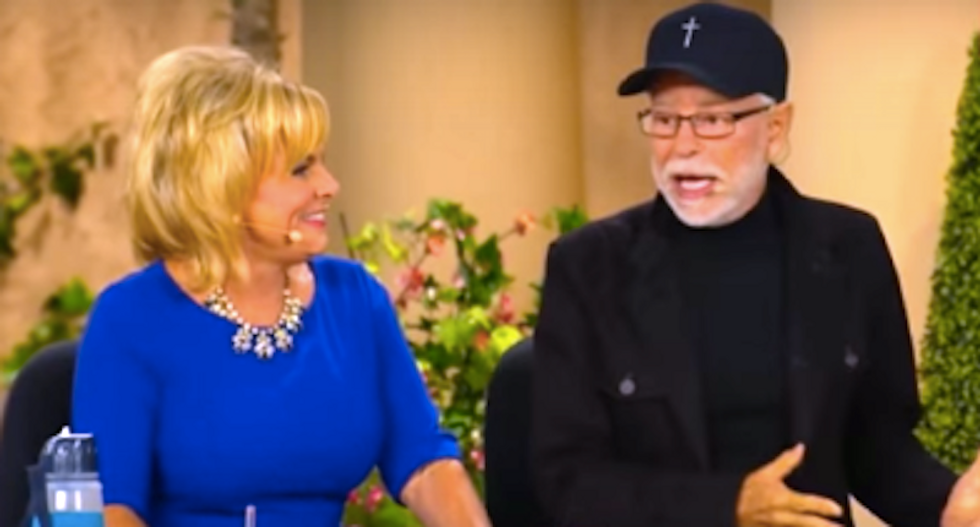 Televangelist Jim Bakker knew something bad was about to go down when he saw which underpants God had picked out for him one morning last month.

Bakker, who has resurfaced as a doomsday prepper about 30 years after he was disgraced by a sex and tax fraud scandal, has been warning the world would end in September and urging Americans to buy his food and other apocalypse-ready supplies.

He explained during a broadcast of his self-titled TV program that God sent him a private message by choosing his underwear, reported Right Wing Watch.

“I went to get dressed, and I pray about what I wear -- I really do," Bakker said. "I know I look stupid sometimes, but the last time God told me to wear a color was red, and what happened that day? The stock market crashed."

"Today, God said, ‘I want you to wear all black,’" Bakker continued. "Even my shoes are black. My underwear is black. My socks are black.”

His wife and co-host, Lori Bakker, teased him about sharing "TMI," or too much information, but Bakker insisted his underwear carried dark portents.

“No, it is not too much information, because when God says, ‘Get the sin out,’ He meant, ‘Get the sin out,’" Bakker explained. "When you take over your enemy, you are to destroy every part of the enemy. I am in mourning because people aren’t ready.”

The world, of course, has not ended as of Tuesday morning.