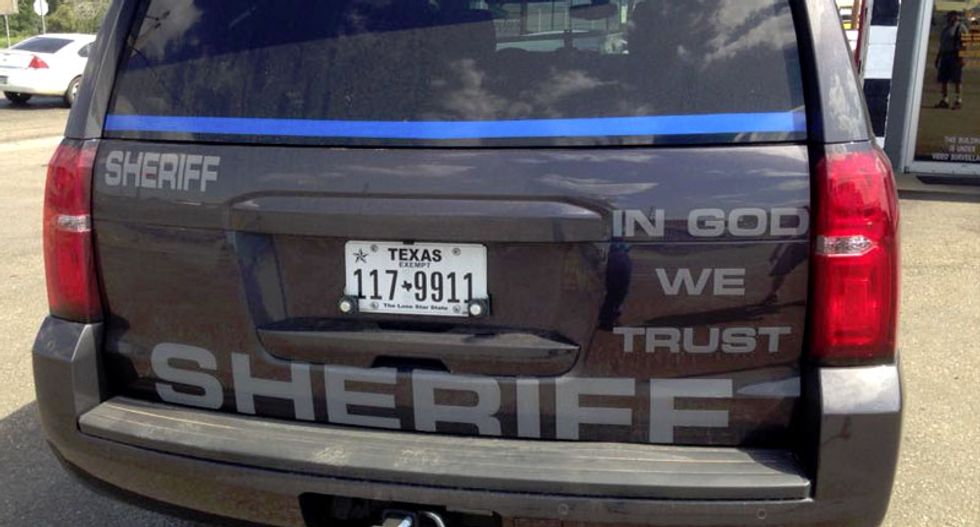 A furor involving a small-town Texas police department and national secular organization has reached the state attorney general's office, and may well wind up in court after that.

At issue: does slapping "In God We Trust" stickers on police patrol cars violate the U.S. constitution?

After fielding a complaint from a citizen of Childress, a Panhandle town of about 6,000, the Freedom From Religion Foundation sent the town’s police department a letter last month asking it to stop using the motto.

The Wisconsin-based foundation, a national church-state watchdog group that claims to be the country's largest association of atheists and agnostics, argued placing the slogan on an official police vehicle breaches the wall separating church and state.

In a widely shared response, Childress Police Chief Adrian Garcia wrote: “After carefully reading your letter, I must deny your request in the removal of our nation’s motto from our patrol units and ask that you and the Freedom From Religion Foundation go fly a kite.”

That response, which Garcia posted on his department’s Facebook page had been liked more than 170,000 times, shared by more than 145,000 accounts and drawn about 20,000 comments as of Monday.

Adopted in the mid 1950s as the nation’s motto, “In God We Trust” is an exclusionary, “Johnny-come-lately” that is unconstitutional and “turns believers into insiders and non-believers into outsiders,” Annie Laurie Gaylor, co-president of Freedom From Religion Foundation, told The Texas Tribune.

“And it makes it seem like those of us who are nonreligious are not part of ‘We the people,’ and in order to be accurate, it would have to say ‘In God Some Of Us Trust,’ and that would be a very silly motto,” Gaylor said. "Many of us, 24 percent of the population today...identifies as nonreligious. And even if it was just one percent, nobody should be excluded by our national motto."

Police departments' timing in using the motto is suspicious, she added.

“We are also offended at the rapidity of this trend to stick ‘In God We Trust’ on police cars and sheriff's cars, because it is suspiciously close to the timing of the national criticism of police forces for shooting down unarmed, innocent African Americans," Gaylor said. "And, to me, it looks like a handy way to wrap yourself in a mantle of piety.”

Garcia's decision to put the motto on the town's 12 patrol cars followed several national tragedies involving law enforcement, and was intended as an act of patriotism and show of solidarity, said Mike Berry, senior counsel at Liberty Institute, a Plano-based religious liberty and legal defense organization.

“The fact that it’s our national motto should speak for itself,” Berry said, adding that the words have been on U.S. currency since the 19th century surviving several legal challenges.

In their letter to Paxton, the two lawmakers noted that “last year, the Second Circuit rejected a challenge by the same organization on the legality of using the motto on our currency.” The U.S. 9th Circuit Court of Appeals first ruled on the constitutionality of the slogan on money in 1970, their letter noted, finding ‘'In God We Trust’' has nothing whatsoever to do with the establishment of religion. Its use is of patriotic or ceremonial character and bears no true resemblance to a governmental sponsorship of a religious exercise.’’”

But a police car differs from paper currency, said David Anderson, a law professor with the University of Texas at Austin who believes the department's display is unconstitutional.

“It’s perfectly clear that you can’t do it,” he said. “That’s officialdom making that statement.”

Though they have some weight, attorney general opinions are not binding, and courts ultimately determine constitutional challenges.

Paxton’s office would only say the issue is important and “will go through the opinions process to make a determination on the law, as we do with all attorney general opinions.” In a campaign letter issued last week, though, Paxton’s position on the issue seemed clear.

With the subject line “Religious Liberties at Risk,” the attorney general said the First Amendment's guarantee of free exercise of religion was "put there expressly to ensure government doesn’t meddle in people’s most personal relationship…that with their Creator."

In the same letter, he commented specifically on the Childress case, saying it is an example of religious liberty come under attack.

“These developments underscore that the opponents of religious freedom aren’t going away anytime soon,” Paxton stated in the email. “I will never be afraid to speak up for what we know is right. We can never be afraid to make it clear that discrimination against Christians and other people of faith is entirely unacceptable. We refuse to be marginalized in the name of political correctness. We will not stand for being discriminated against, targeted and silenced.”

But displaying the motto on police cars is particularly intrusive, Terri Burke, executive director of the American Civil Liberties Union of Texas, said in a statement.

“Blurring the lines between church and state — particularly the enforcement arm of the state — sets a dangerous precedent that in effect treats some groups as second-class citizens," she said. "Officer morale is important, but the Childress Police Department and other law enforcement agencies across the country would do well to implement policies that focus on transparency, accountability and community trust.”

The foundation's letter to the Childress police is one of many it has sent to departments across the country, Gaylor said. Displaying the motto has a chilling effect on nonbelievers, she added.

Adorning their cars with stickers with sentiments such as “Godless,” “Good Without God,” “Imagine No Religion” and “There’s A Sucker Born Every Minute” could lead some motorists into an unjust situation with a police force “full of zealots,” Gaylor said.

“They’re trying to argue themselves out of a bad decision,” the state representative said. “There’s half a percent of the population, probably even way less than that, that are miserable with their lives, trying to make the 99.99 percent of the rest of us miserable by trying to do these type of actions. They just dream up this nuttiness. We need to go back to letting the Childress police officers protect the citizens there.”

There’s nothing wrong or unconstitutional about officers finding solace in the words of the motto, and it should comfort nonbelievers to encounter law enforcement officers that subscribe to a belief system, Springer said.

“If I was a nonbeliever,” Springer said, “I would still have good feelings if someone was acting in a religious way from that standpoint.”

Perry also said in a statement to The Texas Tribune that the motto should remain.

“As our national motto,” he said, “government entities should be free to use it as they feel fit to improve morale and highlight our nation’s religious heritage.”

Disclosure: The University of Texas at Austin is a corporate sponsor of The Texas Tribune. A complete list of Tribune donors and sponsors can be viewed here.