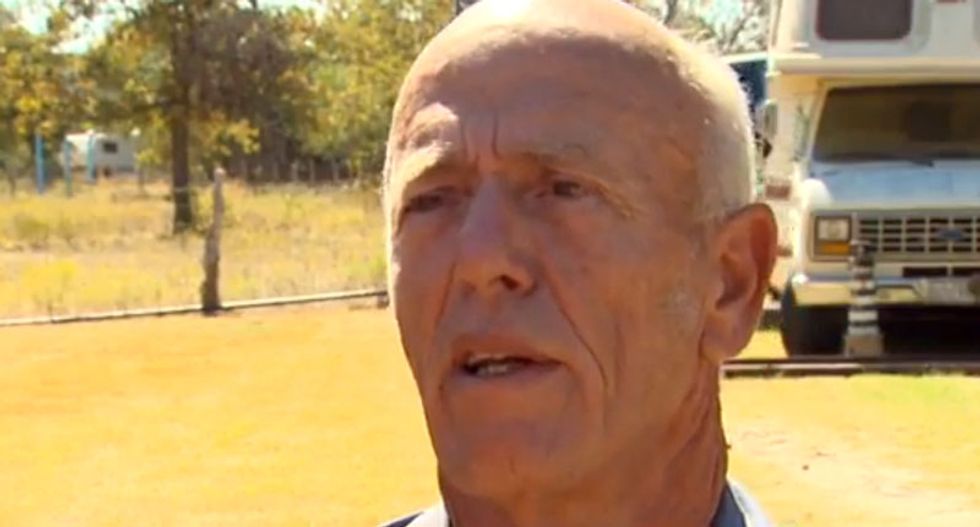 A Texas man seen in a viral video swerving his car and knocking over two people on a motorcycle as they were passing him has been arrested and charged with two counts of aggravated assault with a deadly weapon, authorities said on Tuesday.

William Crum, 68, was taken into custody on Monday and is being held on bond of $75,000 on each charge, said the sheriff's office in Hood County, about 70 miles southwest of Dallas.

In the video taken by a trailing motorcycle rider and seen nearly 4 million times on Facebook, a white car crosses the center line on a street with a single lane in each direction.

It quickly swerves and hits a motorcycle as it passes on the left. The motorcycle was in a no passing zone.

The person who shot the video asks Crum, who had pulled over, about hitting the pair riding on the motorcycle and Crum is seen on the video responding, "I don't care."

Crum later told Dallas-area TV broadcaster WFAA that he swerved because he was stung by something, possibly a wasp.

"I didn't try to hurt anybody. It was a reflex from the pain," Crum told the broadcaster, saying of the motorcycle riders: "I thought it was somebody acting like a idiot,"

The woman on the motorcycle, Debra Simpson, was in intensive care at an area hospital. The driver of the bike, Eric Sanders, was treated at the scene and later sought additional treatment.

"You cannot run bikes off the road. You cannot swerve toward them. You definitely cannot hit them and get away with it," Sanders told the broadcaster.

Watch video, via WFAA, below: