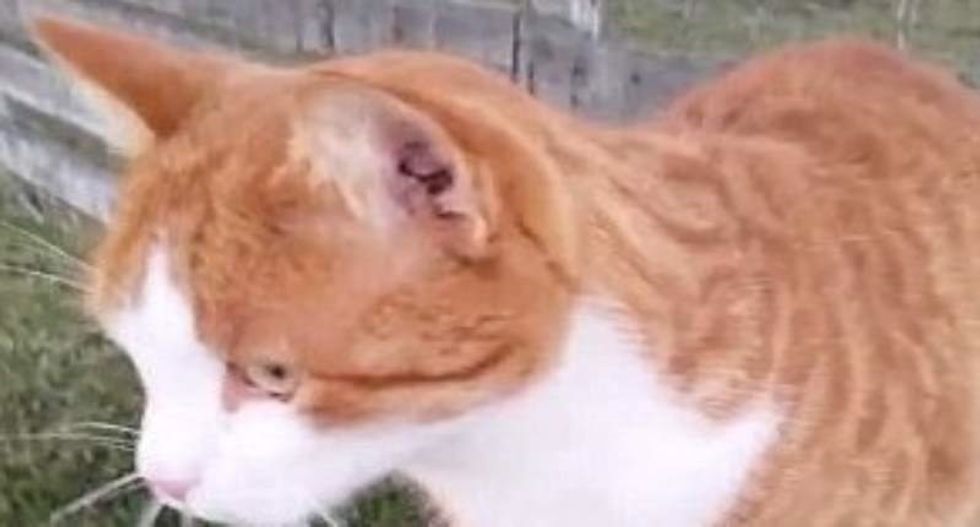 A Texas woman who shot an elderly couple's pet cat through the head with an arrow may soon lose her veterinary license, the Dodo reports.

Kristen Lindsey, who was a vet at the Washington Animal Clinic before being fired in April, bragged on Facebook about killing the cat, named Tiger, with a bow and arrow. The gruesome post contained a picture of a smiling Lindsey holding up a big orange-and-white tabby by the arrow embedded in the cat's head.

“My first bow kill, lol,” she had written on the photo. "The only good feral tomcat is one with an arrow through it’s [sic] head! Vet of the year award … Gladly accepted.”

Not so much. The photo elicited outrage that included death threats against Lindsey. People organized under the banner "Tiger's Justice Team." And the cat was not feral. It was a pet cared for by an elderly couple that liked to ride around on their farm tractor and even had a pet sitter.

The cat had gone missing the same day Lindsey posted the photo.

As a result of the outcry, Lindsey was fired from the animal clinic in April.

In June, a grand jury chose not to indict her on animal cruelty charges, citing insufficient proof. But that wasn't the end of it. The cat's self-appointed justice squad wanted to see to it that Lindsey would face some punishment for killing the cat.

Now the Texas Board of Veterinary Medical Examiners has voted to revoke her license. Lindsey has rejected the call to voluntarily comply, meaning her case will go before the State Office of Administrative Hearings, where a final decision is expected to be made in early 2016, KBTX reports.

"While Lindsey still has a license to practice veterinary medicine in Texas, we are encouraged to see this matter moving in the right direction," wrote the Animal Legal Defense Fund in a Facebook update.

"I was a federal agent 32 years in law enforcement and I know that serial killers start with animals," Lynne Jennings, director of dog rescue organization K-9 Airlift, told KBTX outside the court house in June.

Watch video of Tiger riding around on a tractor with his pet sitter, Amy Hemsell, posted to YouTube here: