The gun debate isn't about mental health, religion or race - it's about too damn many guns 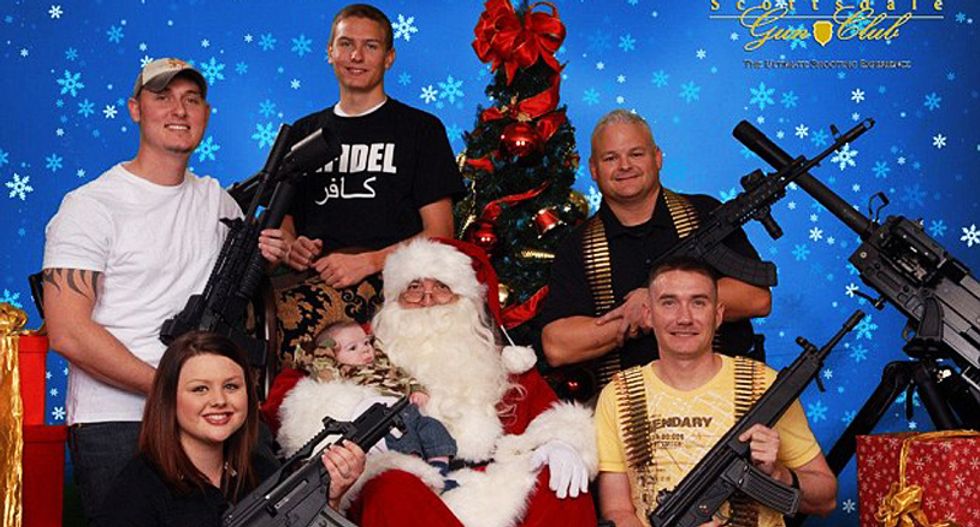 Remove everything that has no relevance to the story. If you say in the first chapter that there is a rifle hanging on the wall, in the second or third chapter it absolutely must go off. If it's not going to be fired, it shouldn't be hanging there. -- Anton Chekov, smart person

As of Sunday morning we were a mere 72 hours removed from a gun nut going on a rampage at an Oregon junior college and -- if you were watching the Sunday gasbag shows -- you would scarcely know that it had even happened. A topic that was delivered into the laps of the Sunday hosts, all tied up with a bloody ribbon, was set aside for discussions on political horse race maneuvering from Beltway pundits guessing what the yokels in flyover land are thinking.

To get a taste for how distasteful this whole "gun nut run amok" thing has become for the pundits, you need only have watched New Jersey Gov. Chris Christie juke George Stephanopolous out of his jock when asked if the tougher gun laws in Jersey had anything to do with lower murder rates in his state.

If Chris Christie busts a spin move on your ass and slips by you -- it's probably time to hang up your cleats and get to writing that memoir no one is really interested in reading.

Not to dump on old George, the same could be found on the other networks as hosts gave a somber and respectful nod to the Oregon victims before moving on to ask candidates what they would do about Syria and about the election next year -- all the while barely acknowledging the answers.

Everyone hosting a Sunday talk show is Chuck Todd now.

It is understandable that people -- and this includes the public -- are already putting the victims of the slaughter at Umpqua Community College behind them. Arguing with folks who are in the pocket of the NRA is both exasperating and exhausting because, as Upton Sinclair put it, getting "a man to understand something, when his salary depends on his not understanding it" is a fool's errand.

Talk about Sandy Hook and the death of 26 innocent people -- 20 of them 6-year-olds who were slaughtered with an AR15 Bushmaster in a classroom -- and the topic turns to mental health.

Elliot Rodger killed six people and injured fourteen in California because he couldn't get a date.

The shooting of nine black churchgoers in a Charleston church was about race.

Alison Parker and Adam Ward were publicly executed on camera in Moneta, Virginia, over race and gender issues.

And Chris Harper-Mercer brought six of his thirteen weapons with him to kill nine and wound a handful more because he hated Christians. The NY Post dubbed him the "Anti-Christ Killer," which was absolutely lovely.

Those are now the official narratives in each story and each one glosses over the one thing they all have in common.

There are approximately 300 million guns floating around in the U.S. -- almost one for every man, woman and child. Every time Americans witness another one of our ritual bloodlettings for freedom, a whole new bunch of morons run out and buy AR15's figuring they may get a chance to play hero someday. Because adding more guns to the equation somehow equals a greater probability of not being shot --- if you're a proponent of idiot algebra.

How easy is it to get a gun? As Joyce Engel pointed out, it's easier than adopting a stray dog from a rescue shelter.

As a people we are bound and determined to talk about these shootings as long as we agree that the problem of easy access to guns won't be part of the conversation. And there is a contingent of folks ready to extinguish the last spark of humanity left in their souls in order to run interference for the NRA -- who, it just so happens, officially run interference for the gun makers who think Americans need more powerful weapons of war in their households.

For hunting rabbits and plinking cans, of course.

We do have a mental illness problem when it comes to guns.

We have willfully retreated from reality and ignore all the signs that we are an increasingly violent country with increasing numbers of guns flooding into our homes and that this will inevitably lead to more deaths.