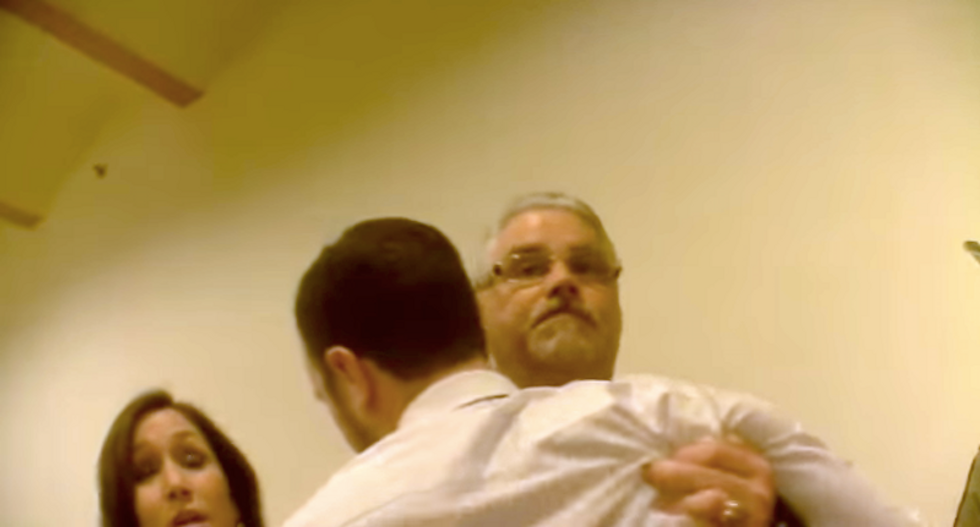 An apparently intoxicated Texas Republican had to be restrained during a confrontation recorded by a conservative activist group linked to prank filmmaker James O'Keefe.

The American Phoenix Foundation recorded more than 800 hours of covert footage as team members approached GOP lawmakers inside and outside the Capitol earlier this year, and the conservative activist group has begun releasing some of those videos as they target incumbent Republicans to shift the Texas Legislature further to the right.

The Tea Party activist group released an undercover video last month that showed state Rep. Harold Dutton (D-Houston) claiming his ties to law enforcement and the Bonnano crime family would allow him to get away with murder, but the lawmaker said later he was only joking.

The next video, released last week by the group, shows state Rep. Dan Huberty (R-Humble) leaving the Statehouse floor May 29 after voting to prohibit the types of undercover recordings he encountered in the hallway.

Huberty interrupts a cell phone call with his wife to call the APF activist a "joke" and a "dick," and the unidentified activist says the lawmaker smells like alcohol and asks whether he's been drinking.

The video is clipped at that point but resumes when Huberty approaches the activist and asks if he wants to have a conversation.

"I'll tell you what," Huberty says, slurring his speech. "I'm a family man, I have three kids, beautiful kids, and I worked my whole life. You got a problem with me? So why (do) you confront me all the time. I'm an adult, I can have a drink at night, right?"

The activist asks whether he just left the Statehouse floor after adjourning about 10 minutes earlier, and he challenges Huberty's assertion that the session ended two hours ago by checking the time on his own watch.

The activist makes another attempt to provoke the lawmaker, who calmly listens as he accuses him of drunkenness and then says he has asked the activists not to talk to him.

"You're a legislator," the activists says. "If you can't take the heat, get out of the kitchen, man. I mean, you're a public official, you can't handle some questions."

The lawmaker then invites the activist to ask questions, and he begins asking about Huberty's positions on same-sex marriage, open carry, permit requirements for Statehouse reporters, legalization of marijuana, and romantic relationships between legislators and staffers or lobbyists.

"Is it inappropriate for legislators to be as buzzed as you are right now?" the activist asks. "It just seems like you're drunk on the job."

Huberty says lawmakers have a "right to be human" during a long legislative session, and he invites the activist to his house and even provides his home address -- which the activist asks him to repeat but does not edit out of the video posted online.

Staffers surround Huberty at that point, but he pushes them away as he becomes more combative with the activist, and two officers from the Department of Public Safety then approach.

The staffers escort Huberty away from the activist, who asks whether the DPS security was a waste of taxpayer money.

Staffers usher the lawmaker into a stairwell, and the activist attempts to follow with his camera still recording but the DPS officers attempt to block his path.

The recording ends after the activist finally spots the lawmaker exiting the building, and Huberty waves and thanks him for his questions.