This is how the world will end -- according to NASA 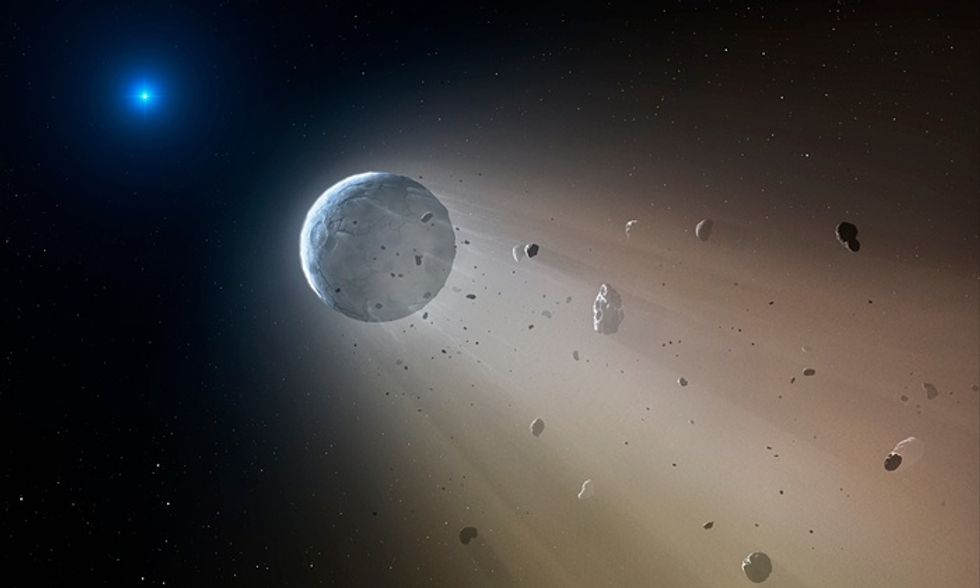 An artist’s interpretation of the events, captured by Kepler 2, showing a Ceres-like asteroid slowly disintegrating as it orbits a white dwarf star. Photograph: Mark A. Garlick

Earth’s final days are in the distant future, but the the death of a far-off solar system revealed in images from Kepler 2 shows how the world might end

The destruction of a solar system has been captured for the first time by astronomers who said the violent events provide a grim glimpse of Earth’s ultimate fate.

Images taken by Nasa’s Kepler 2 space mission reveal the rocky remains of a world that is being torn apart as it spirals around a dead star, or white dwarf, in the constellation of Virgo, 570 light years from Earth.

Scientists spotted chunks of shredded planet swinging around the white dwarf every 4.5 to five hours, placing them in an orbit about 520,000 miles from the star, about twice the distance between the Earth and the moon.

“This is something no human has seen before,” said Andrew Vanderburg at the Harvard-Smithsonian Center for Astrophysics. “We’re watching a solar system get destroyed.”

Sun-like stars are driven by nuclear reactions that transform hydrogen into helium. But when the hydrogen runs out, they burn heavier elements, such as helium, carbon and oxygen, and expand dramatically. Eventually, the star sheds its outer layers to leave an Earth-sized core known as a white dwarf.

Related: Science vine: the life of a star

Vanderburg’s team spotted the cosmic catastrophe with the Kepler 2 mission, which can detect the existence of new planets by the telltale dimming they cause when they pass in front of their parent stars.

Instead of looking at sun-like stars, the scientists studied a white dwarf known in astronomical circles as WD1145+017. They found that every 4.5 hours, Kepler 2 detected a 40% drop in light from the star, as a chunk of material moved across its face.

Initial observations from Kepler were backed up with further measurements from other telescopes, including the Whipple Observatory in Massachusetts, the MEarth-South telescope in Chile and the Keck Observatory in Hawaii. Together, they found evidence for several lumps of rock in orbit around the dead star.

Writing in the journal, Nature , Vanderburg describes the results as the first evidence for rocky, disintegrating bodies around a white dwarf. The discovery explains a long-standing, if obscure, mystery in astronomy: the source of the heavy metal pollution seen in some white dwarf stars.

“We now have a smoking gun linking white dwarf pollution to the destruction of rocky planets,” Vanderburg said.

Astronomers are not clear where the rocky objects came from in the first place, but one possibility is that the star’s death destabilised the orbit of a neighbouring massive planet in such a way that smaller rocky worlds were kicked towards the star. They get so close that the searing heat starts to vaporise them as the gravitational forces tear them apart.

A similar fate may well await our own solar system. When the sun dies in five billion years, it will expand and engulf the inner planets, toasting Mercury and Venus, and potentially Earth too. But if Earth survives that cosmic trauma, it may find itself being shredded as it spirals into the white dwarf that the sun becomes. “We might be seeing how our own solar system could be disassembled in the future,” said Vanderburg.

Francesca Faedi , an astronomer at the University of Warwick, said the death of the star Vanderburg’s team observed may have sent planets in the distant solar system crashing into one another, reducing them to rocks that resemble asteroids.

“It is extremely exciting that astronomers have recorded the final throes of a planetary system,” she writes in an accompanying article in Nature. “Although Earth’s final days are a long way into the future, this research has allowed us a glimpse of the probably inescapable outcome.”