'This victory truly belongs to the nation': Same-sex marriage signed into law in Ireland 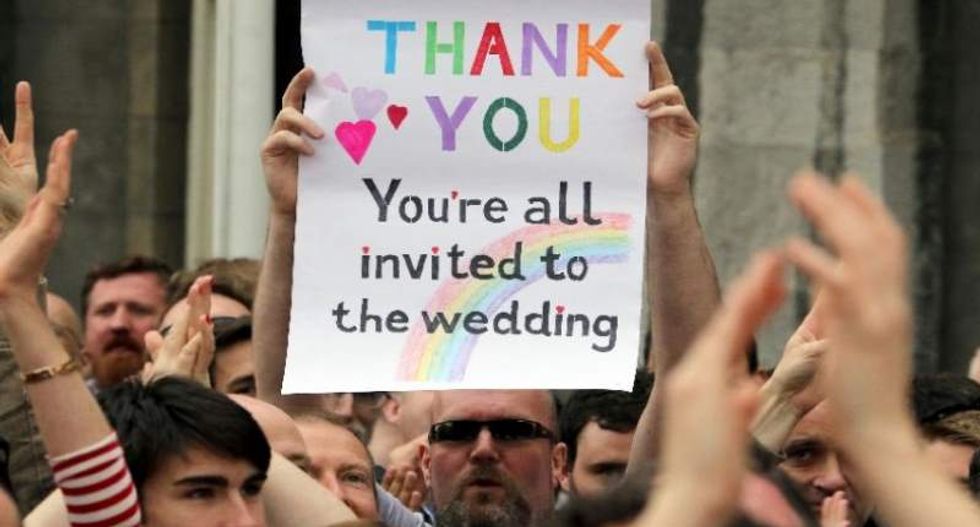 Revelers hoist a celebratory sign after Ireland's marriage referendum passed resoundingly on May 23, 2015. Photo by Paul Faith for Agence France-Presse.

Same-sex marriage was signed into law in Ireland, five months after a historic referendum saw the traditionally Catholic nation become the world's first country to vote for gay unions.

"The Presidential Commission today signed the 'Marriage Bill 2015' into law," the president's office said in a statement, paving the way for the first weddings within a month.

Ireland voted 62.1 percent in favour of allowing marriage between two people "without distinction as to their sex" in May, the first time anywhere that gay marriage has been legalized in a referendum.

The president's endorsement was the final hurdle for the bill after legal challenges briefly delayed the legislation from coming into effect.

The first ceremonies should be possible by mid-November, according to Justice Minister Frances Fitzgerald.

Senator Katherine Zappone, who had long campaigned for her Canadian marriage to her wife to be recognised in Ireland, called it "a defining moment".

"It is a deeply emotional moment for those of us who have campaigned for so long," Zappone said in a statement.

"This victory truly belongs to the nation, it is a moment for us all."

In a memorable moment that unfolded live on national television after the referendum result was announced, Zappone proposed to her wife Ann Louise Gilligan to re-marry her under Irish law.

International gay rights campaigners congratulated efforts by Irish activists to win public support for a "Yes" vote in the referendum.

"Tribute must also be paid to national politicians in Ireland, as all the main political parties put aside their partisan differences to campaign for the greater goal of equality," Evelyne Paradis of the International Lesbian, Gay, Bisexual, Trans and Intersex Association said in a statement.

Marriages between same sex couples that took place outside of Ireland will now be recognised under Irish law.

Couples already in civil partnerships, which were introduced in Ireland in 2011, will be able to marry within weeks.

May's referendum generated a lively, and at times divisive, debate in Ireland, which only decriminalised homosexual acts in 1993.

"The referendum confirmed that Irish people want a society that embraces diversity while valuing the family and marriage," Fitzgerald said last week, as the bill passed through the upper house of parliament.

"On 22 May 2015, the people of Ireland showed the scale of their ambition for our society."

President Michael D Higgins is on a visit to the United States, so in his place the bill was signed by senior delegates of the Presidential Commission.