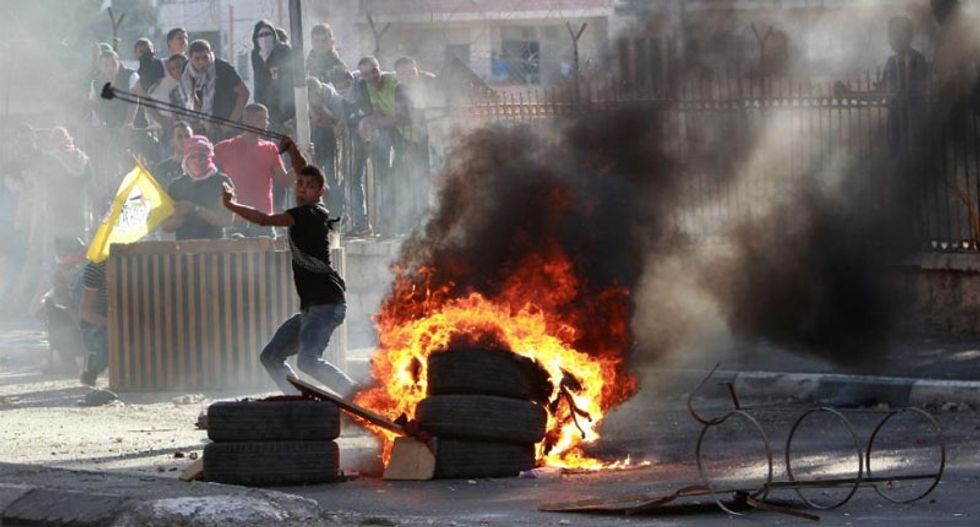 A Palestinian youth uses a slingshot to throw stones at Israeli security forces during clashes at the main entrance of the West Bank town of Bethlehem on October 6, 2015 (AFP Photo/Musa Al-Shaer)

Jerusalem suffered its bloodiest day yet Tuesday in a wave of unrest, with at least three people killed and many wounded in shooting and car-and-knife attacks on Israelis.

One of the attacks, which saw an assailant open fire on a bus, marked the first assault with a gun in Jerusalem in the two-week-old upsurge of Palestinian violence.

The rising tide of unrest, which has seen a series of stabbing attacks and violent protests, has raised fears that a full-scale third Palestinian uprising, or intifada, could erupt.

In the first and second intifadas, in 1987-1993 and 2000-2005, hundreds were killed in near-daily violence between Israel and the Palestinians.

The bus attack saw one assailant with a pistol and another with two knives assault some 15 people travelling on an east Jerusalem bus, police said.

Two Israelis were killed, including a 60-year-old, while around 10 others were wounded, medics and police said.

One of the attackers was shot dead while the other was wounded, police said.

"I was in my house and I heard between 20 and 30 shots between the police and the terrorists," a man who lives in the area said, declining to give his name.

In another attack around the same time in an ultra-Orthodox Jewish neighbourhood of Jerusalem, an assailant drove a car into a group at a bus stop and exited with a knife.

At least one person was killed and eight wounded, medics said. The attacker was also wounded.

It was not clear if the attacks were coordinated.

The Jerusalem attacks came after a Palestinian stabbed and wounded a passerby north of Tel Aviv before being overcome by civilians in the area.

Police described the attacker as a 22-year-old Palestinian from east Jerusalem and said he was taken to hospital with serious injuries after being beaten by residents.

After first breaking out with attacks and violent protests in annexed east Jerusalem and the occupied West Bank, unrest has also spread to the Gaza Strip, with clashes along the border in recent days leaving nine Palestinians dead from Israeli fire.

In response to the violence, Israel was planning an emergency meeting of its security cabinet.

Palestinians were meanwhile calling for a "day of rage" on Tuesday and Arab Israelis were planning a general strike in support of them.

Funerals of Palestinians killed during unrest or while allegedly carrying out attacks -- as well as videos of the shootings -- have fed anger.

More than 20 stabbing attacks have occurred in Israel, Jerusalem and the West Bank since October 3.

There has been one revenge attack, with a Jew stabbing and wounding two Arab Israelis and two Palestinians in the southern Israeli city of Dimona last week.

At least 30 people have died so far in the recent unrest.

Prime Minister Benjamin Netanyahu vowed Monday that Israel would not bow to "knife terror" but Palestinian unrest has shown little sign of slowing.

The knife attackers have usually been young Palestinians who appear to be acting on their own.

Frustrated Palestinian youths have defied president Mahmud Abbas as well as an Israeli crackdown by staging violent protests in east Jerusalem and the West Bank.

On Monday evening, dozens of Gaza residents broke through the border fence and briefly entered Israel before being pushed back by troops, Palestinian witnesses said.

The violence began on October 1, when an alleged Hamas cell shot dead a Jewish settler couple in the West Bank in front of their children.

Palestinians have thrown stones and firebombs at Israeli forces, who have responded with live fire, rubber bullets, tear gas and stun grenades.