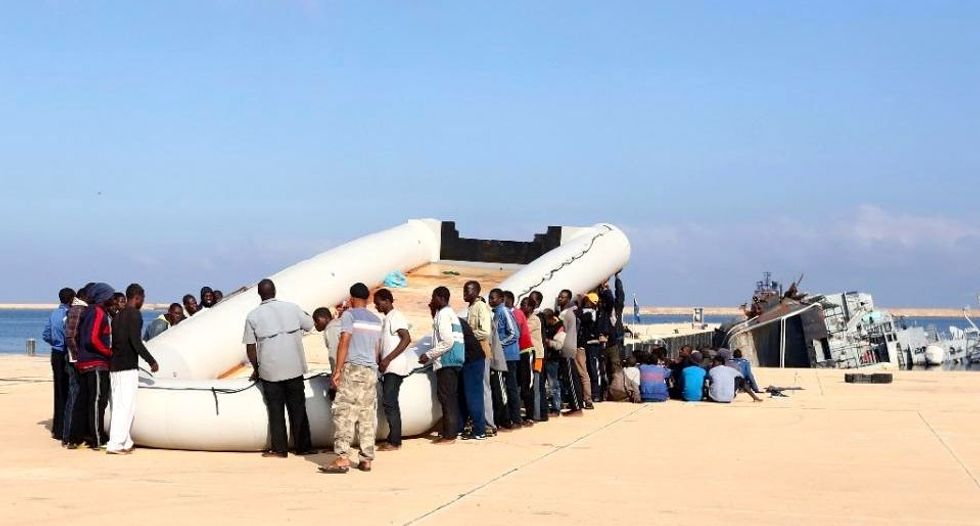 Migrants carry a raft, after being rescued by the Libyan coastguard, at a naval base near the capital Tripoli on October 5, 2015 (AFP Photo/Mahmud Turkia)

The UN Security Council on Friday approved a European military operation to seize and destroy boats used by migrant smugglers in the Mediterranean after thousands died in dangerous crossings.

European warships on Wednesday launched Operation Sophia to seize traffickers' boats in international waters off Libya's coast, in the second of a three-phase campaign to stem the flow of migrants.

British Ambassador Matthew Rycroft told the council the military action would save lives by taking aim at human-trafficking gangs.

"These groups have no respect for human life," he said.

"They exploit those taking the perilous journey across the Mediterranean, they overfill poorly maintained boats, ill-suited to such a difficult crossing, and abandon their passengers at the first sign of trouble."

This year alone, 3,092 people have died while crossing the Mediterranean to Europe, while more than half a million have made the voyage, mostly landing in Greece and Italy, according to the International Organization for Migration.

In June, the European Union launched the first phase of the operation, which involved monitoring trafficker networks and rescuing refugees from rickety boats.

The UN mandate does not oblige the European Union to take action but does provide Operation Sophia with greater legitimacy.

EU foreign affairs chief Federica Mogherini described the resolution as "an important political endorsement by the international community" of the EU maritime force and its operation on the high seas.

The measure was adopted under Chapter 7 of the UN charter, which authorizes use of force, but it limits the UN mandate to a period of one year.

The 15-member council adopted the measure by a vote of 14 in favor, with Venezuela abstaining.

Under the resolution, European naval forces are authorized to board ships for inspection, seize them and even dispose of vessels suspected of being used by migrant smugglers.

It does not, however, authorize action in Libyan territorial waters or on the country's coast, which the European Union wants to carry out in the third phase of its anti-trafficking plan.

Presented to the Security Council last month, the resolution faced initial resistance from African countries while Russia raised questions about the measure.

Venezuela opposed it from the outset for authorizing the use of force.

Venezuela's Ambassador Rafael Ramirez told the council that Europe's migrant crisis was "being tackled in an erroneous fashion" by resorting to military force.

"It's not by raising walls or taking military action that this serious problem can be resolved," he said.

African countries and Russia changed their stance after Libya's internationally-recognized authorities dropped their opposition to the resolution.

Libya's Ambassador to the United Nations Ibrahim Dabbashi told the council that while his government supported the military operation, "illegal migration cannot be dealt with solely with security measures."

The United Nations is pushing for the formation of a new unity government in Libya that will be able to tackle human-trafficking gangs on its territory.

On Thursday, Libyan authorities said they had arrested some 300 migrants as they were preparing to board boats.

Libya's descent into chaos since the fall of Moamer Kadhafi in 2011 has turned the country into a hub for migrant smuggling, drawing refugees fleeing conflict in the Middle East and poverty in Africa.

The Christian right's self-destruction is unfolding before our eyes

I almost feel sorry for Herschel Walker. He is so clearly unfit for the job of United States senator that it's uncomfortable to watch him flounder about, unable to coherently answer even the simplest questions or offer any reasons why he should be one of the most powerful people in government. He was a star athlete, forever to be revered by college football fans, and now he's just a pathetic tool of cynical politicians, particularly, of course, Donald Trump. Still, Walker willingly allowed himself to be used and that's on him.

Once again we see the shamelessness of the Republican Party and the rank hypocrisy of the conservative evangelical Christians who form its strongest base. They're sticking with Walker no matter what, with ludicrous excuses that wouldn't pass theological muster in a fourth-grade Sunday school class.

The former leader of the Oath Keepers militia and his four associates went on trial for seditious conspiracy this week. The defendants are accused of conspiring to prevent the transfer of power from Donald Trump to Joe Biden, a plan which included, but was not limited to, the siege of the US Capitol on January 6.

Stewart Rhodes and his minions are the first J6 defendants to be tried under this rarely-used Civil War-era statute. The government’s track record of convicting far-right defendants of seditious conspiracy is weak, but the facts of the Oath Keeper affair make for an unusually strong case.

Astronomers have discovered a stunning fact about so-called 'Super Earths'