WATCH: Alabama man shuts down cops who questioned him for jogging while black -- and it's perfect 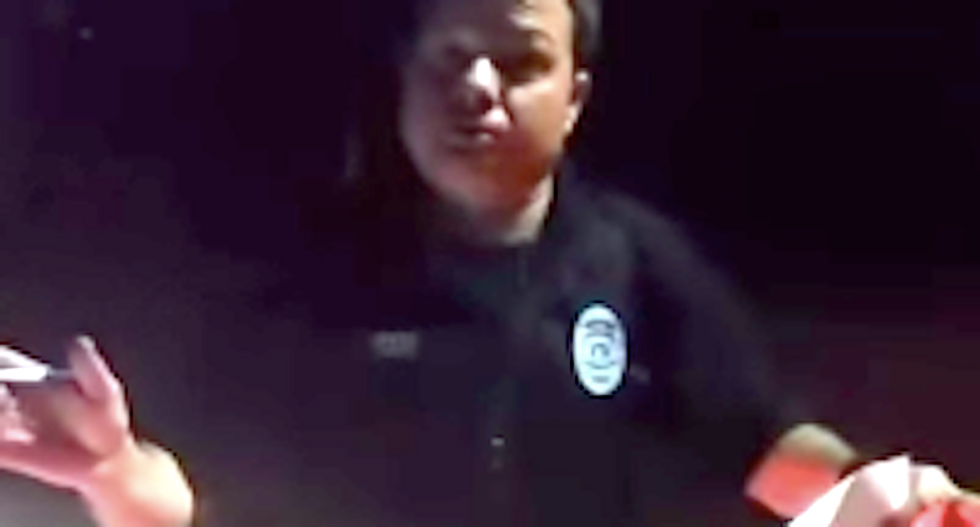 An Alabama man recorded himself shutting down two police officers who questioned him for jogging while black.

The man, identified as Corey Dickerson, was out of breath and resting after a hard sprint when an officer pulls up in his patrol car to ask who he is and where he is going, reported The Free Thought Project.

Dickerson, of Talladega, asks the officer if he has done anything wrong, and then he calmly and politely refuses to give his name or state his business.

The jogger says he has been running "just around," and says he's headed "nowhere in particular."

Dickerson tells the officer he's carrying identification and gives his first name, and the officer pulls over to park.

"Well," pants Dickerson, still out of breath, "looks like I'm about to get harassed."

Dickerson tells the officer he intends to stay at the front of the patrol car in full view of the dashboard camera, and he notifies the officer that he is recording the encounter on his cell phone, which automatically uploads video.

"Look, my camera does the same thing, and you can tell them why I stopped you," the officer says. "It is 12:30 in the morning, I've had a lot of burglaries and thefts. You can get this on camera, so now I'm just asking you for your ID."

Alabama is a "stop and identify" state, which means law enforcement officers may "stop any person abroad in a public place whom he reasonably suspects is committing, has committed or is about to commit a felony or other public offense and may demand of him his name, address and an explanation of his actions."

Dickerson is familiar with the law, and he repeatedly asks the officer, who agrees to identify himself as Officer Price, if he is suspected of a crime and, if so, which crime.

A second officer arrives, and Dickerson says he had passed that same officer twice that night without being stopped.

The second officer recalls seeing Dickerson jogging on a sidewalk, and then he tries to explain to the jogger that police must investigate any suspicious activity they spot while on patrol.

"I'm not a lawyer, don't even pretend to be one, but I know that in order to detain me, you've got to have some type of reasonable suspicion that I've committed some type of crime," Dickerson said. "I'm minding my own business out here, I'm literally jogging -- exercising."

"He literally seen me just standing right here," Dickerson says. "I was literally bent over right here, catching my breath."

Dickerson and the second officer take turns establishing their credentials as reasonable men with good intentions.

The officer explains that police are on alert after a woman from Pennsylvania who lived nearby had been targeted twice by thieves, and Dickerson recalled later that he actually knew that woman, but those incidents had happened several years ago and the woman had since moved away.

The officer also says police must be vigilant due to shootings in the area, but Dickerson said he was worried about gun violence, too, but pointed out that most shootings involved teenagers.

Dickerson concedes he doesn't follow every law all the time, but he said police had no reason to stop or search him.

"I don't mean to interrupt you, but I don't trust police just because I got my hair pulled out, I was choked, tased, maced, beaten bloody -- you hear me? beaten bloody -- by four cops while I was in handcuffs," Dickerson claims. "One bad apples spoils the whole bunch for me."

The second officer says they could search him for weapons if they chose to, but he says they don't intend to take the encounter that far.

"If he wants to push it far enough, he can even arrest you for failure to identify," the officer says.

The officer tries to explain why his colleague was suspicious, and says all police wanted was his name and date of birth to determine whether he was wanted on an open warrant.

"That's another thing, I might have warrants, though," Dickerson says. "I'd be a fool to give you guys my name, then I go to jail and lose my job. I don't have no bail money, no bond money."

The officer asks if he has any open warrants, and Dickerson says he doubts it.

"Last time I went to court (two weeks ago), nobody tried to arrest me," he says.

Dickerson explains he was cited for trespassing during a dispute with a girlfriend in Knoxville, and the officer agrees that he would have been arrested if he was wanted on another warrant.

The video ends at that point as Dickerson called his sister, and he was not arrested.

Watch video of the encounter posted online by The Free Thought Project: