WATCH: Gun nut shows how to use rifle to carve a Halloween pumpkin -- because society is doomed 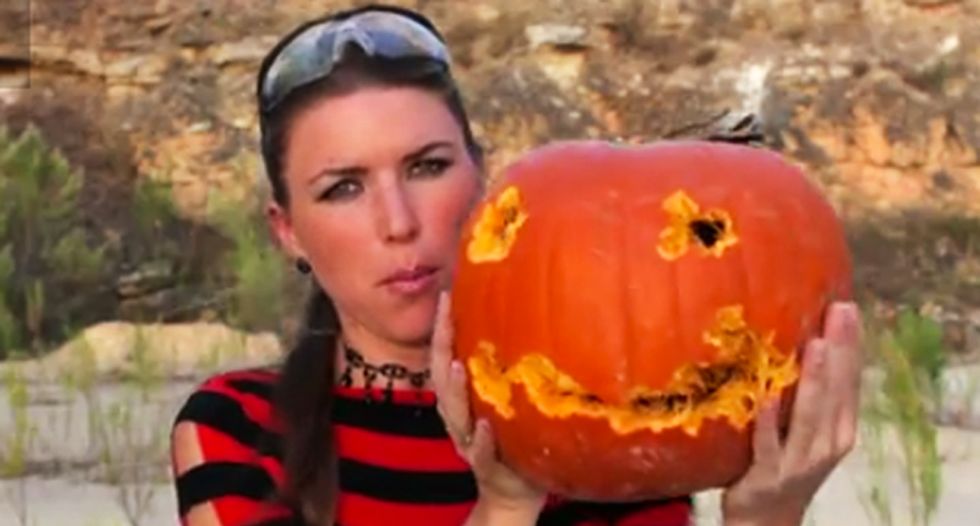 For many, Halloween is a cherished childhood holiday heralded by the official carving of a scary face into a pumpkin, thus making it a Jack O' Lantern.

For gun nuts, it's just another reason to shoot stuff.

After all, why go to the time and expense of buying an elaborate carving kit that teaches you how to make a Star Wars face or announce your support for the University of Alabama (Roll Tide!) when you can just take your pumpkin out into the backyard and shoot a bunch of holes in it to make a face?

Guns: Is there anything they cannot do?

Except recall a bullet and restore an innocent life.

According to "performance trick shot shooter" -- yes, there is such a thing -- Kirsten Joy Weiss, you can create a suitably scary pumpkin to scare the hell out of the neighborhood kids with a few well-placed shots to the pumpkin noggin.

It's fun! And educational! And you get to shoot stuff and watch it explode -- which is a very American thing to do!

Best of all, as Weiss demonstrates in the video below, you end of with faces on both sides of the pumpkin with no additional labor.

There is the delicate -- depending upon you ammo -- "Entry Wound Jack" or the much scarier "Exit Wound Jack O' Lantern" who is sure to remind the neighborhood kids that they better watch their asses if they walk on your lawn. Particularly if they live in a "Stand Your Ground" state.

And there is absolutely nothing about Halloween that is scarier than that.