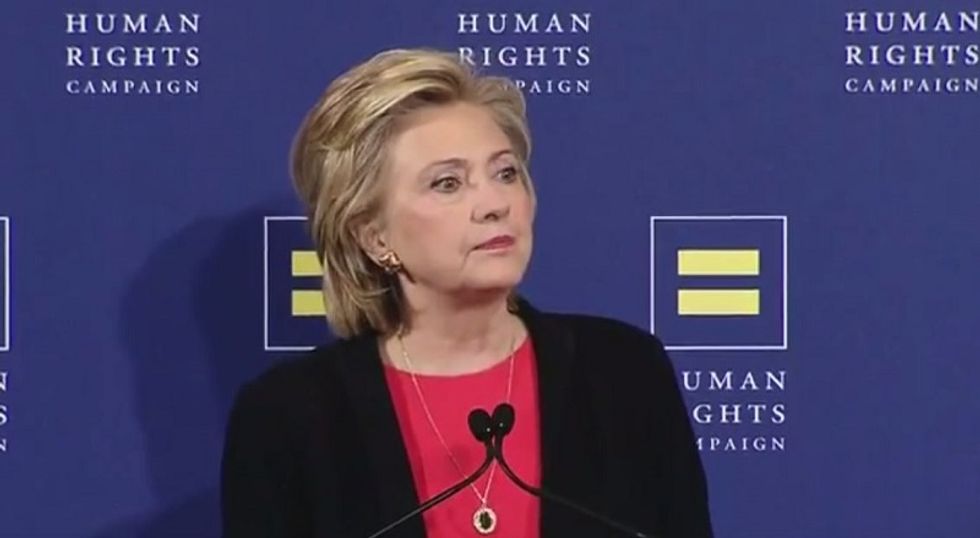 "I wish that all the progress that we've made was so secure and so deeply-ingrained in our laws and values that we didn't have to keep constantly defending it," Clinton said, after joking that it would be nice to kick back after the Supreme Court's landmark Obergefell ruling legalized same-sex marriage in all U.S. states.

She called on Congress to pass the federal Equality Act.

"But we're not there yet. There are still public officials doing everything in their power to interfere with your rights," she said. "There are still too many places where lesbian, gay, bisexual and transgender Americans are targeted for harassment and violence."

She then blasted Huckabee for "literally standing in the courthouse door in Kentucky calling for people to join him in resisting a Supreme Court ruling, celebrating a county clerk who's breaking the law by denying other Americans their constitutional rights."

She went on to call for federal anti-discrimination laws that protect the LGBT community, saying it's outrageous that in 2015, LGBT people can still get fired or lose their homes for being who they are, or "even be denied a wedding cake for being gay."

The Equality Act, she said, would "finally outlaw discrimination against LGBT people."

Watch Clinton's speech to the HRC, as posted to YouTube, here: