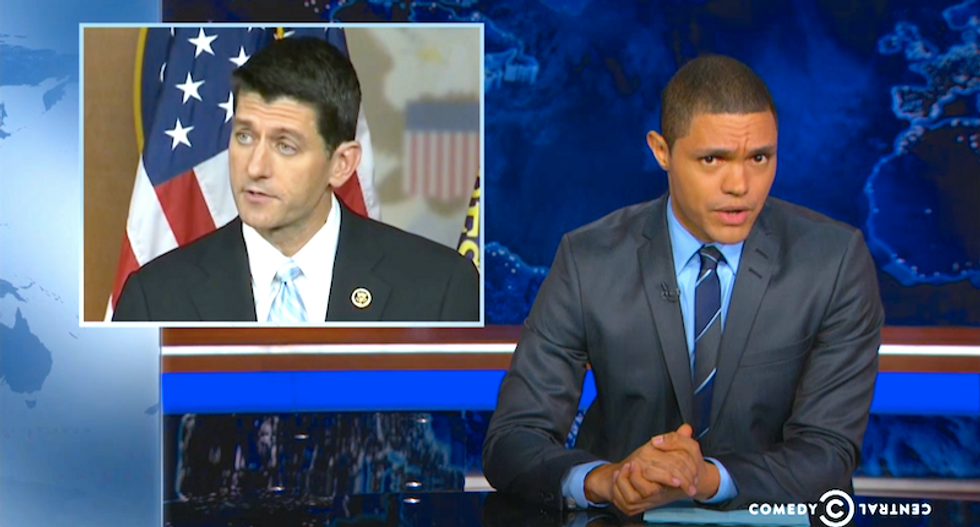 Daily Show senior congressional correspondent Jessica Williams dug up on Wednesday what she called Rep. Paul Ryan's (R-WI) more outlandish demands before he would entertain a run as House Speaker.

"Before he accepts the job as Speaker, Paul Ryan wants a protein shake fountain; he wants a family set of Segways; to be on the cover of Men's Health magazine forever; it looks like a helicopter to get to Mexico in case things go sour," she told host Trevor Noah. "And for some reason a Sephora shopping spree with Beyoncé and Nicki Minaj for me."

Noah didn't take the bite on Williams' last item, but did say the rest seemed doable -- until Williams said the congressman also wanted his own theme song.

"Written and performed by all four Beatles," she added.

Noah said Ryan's initial demands -- including that he not lose out on time with his family and that House conservatives give up their ability to remove a speaker -- was the craziest he had seen since the Ten Commandments, while also mocking Ryan for saying that he began considering running for the position after worrying that he would be questioned by his children later on in life.

"Do you really think this is what your kids are gonna be asking you in the future?" Noah asked. "What's your reply? 'What can I say kids, back in 2015 I honestly thought the future hinged on who would be House Speaker. Not the fight against climate change. Now get your scuba gear on and come to dinner.'"

Watch Noah and Williams' commentary, as posted online on Wednesday, below.