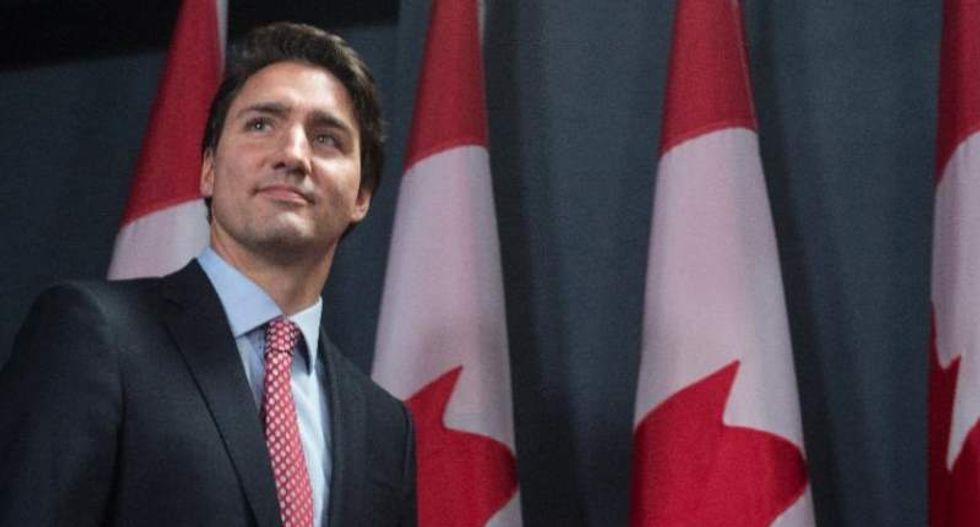 Liberal leader Justin Trudeau reached out to Canada's traditional allies Tuesday after winning a landslide election mandate to change tack on global warming and return to the multilateralism sometimes shunned by his predecessor.

Monday's decisive win ended nearly a decade of Stephen Harper's Tory rule, prompting the 43-year-old Trudeau to rebuild ties that soured over the issue of climate change with a "constructive" new style of government.

"I want to say to this country's friends all around the world: Many of you have worried that Canada has lost its compassionate and constructive voice in the world over the past 10 years," the prime minister-elect told cheering supporters at a rally in Ottawa.

"On behalf of 35 million Canadians, we're back," said Trudeau, the telegenic son of the beloved late premier Pierre Trudeau.

The White House said President Barack Obama, whose administration had clashed with Harper on climate policy, looked forward to partnering with Trudeau on the combatting climate change, as all eyes turned towards the Paris climate conference in December.

But Trudeau verged from the path forged by his US ally on security, informing Obama by telephone Tuesday that he will withdraw fighter jets from a US-led coalition against the Islamic State group in Iraq and Syria.

Trudeau said however that he will keep Canadian military trainers in northern Iraq.

While Canada remains "a strong member of the coalition against ISIL," Trudeau said he made clear to the US leader "the commitments I have made around ending the combat mission." No timeline was given for the withdrawal.

Labeled a "climate laggard" by the UN, Canada under Harper became the first country to pull out of the landmark Kyoto Protocol in 2011, inflicting lasting damage on relations with allies in Europe among others.

"Canada is a member of the Group of Seven and as a result, it has a particular role to play in terms of providing leadership on climate change issues," UN spokesman Farhan Haq said.

"The secretary-general hopes and expects that Canada will play that role."

Monday's election for many Canadians was a referendum on Harper's autocratic style and their country's loss of clout on the world stage.

As prime minister, Harper radically altered Canada's foreign policy, transforming it from an impartial arbiter to an assertive power with its own agenda, including strident support for Israel and refocusing aid from Africa to South America.

Under Harper, the country also lost a bid for a rotating UN Security Council seat and failed to get US approval for a pan-continental oil pipeline first proposed in 2008.

"We're going to see a re-engagement under the Liberals, with multilateral organizations like the United Nations, especially with climate talks coming up in Paris" and other summits including the G20 and Commonwealth, echoed professor Lauchlan Munro, also at the University of Ottawa.

Trudeau has said more needs to be done to curb carbon emissions, but he has stopped short of setting specific targets ahead of the Paris talks.

"It's unclear how he would achieve a new target," said Jonathan Paquin, a politics professor at Laval University in Quebec.

Ottawa shares environmental responsibility with its 10 provinces, which are all working to meet different targets. At times this has complicated setting national CO2 reduction targets.

But the issue is already shaping up as a priority for the incoming administration.

Quebec Premier Philippe Couillard said Tuesday "the world wants a change in tone and priorities on the climate file" from Canada.

"We have time before December (for Ottawa and the regions) to come up with a firm target that Canada will pitch at the talks," he said.

Other foreign policy pledges may prove tougher to deliver on, however.

Munro said "pressure from allies could be difficult to overcome -- what would the Americans, British and French say if we pulled out?"

Trudeau also vowed to significantly boost Canada's intake of Syrian refugees, more than doubling it to 25,000 by year's end, insisting only political will has been lacking so far. Foreign aid could also see an increase for the first time since 2010.

The Liberals had criticized a shift from focusing on poorer Africa to South American middle income countries -- and the aligning of aid with Canadian commercial interests.

But Munro noted that the shift in approach began under a previous Liberal administration, in 2004. "It remains to be seen how it will be different," he said.

Trudeau and his cabinet -- which he said would include an equal number of men and women -- will be sworn in on November 4.