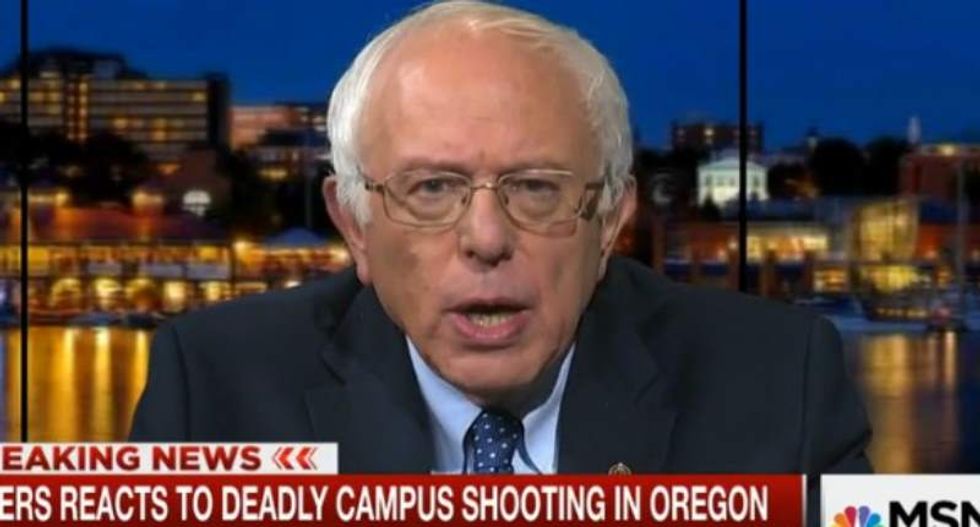 Sen. Bernie Sanders (I-VT) said on Thursday night that President Barack Obama was right to call for stronger gun safety laws in the wake of the mass shooting at Umpqua Community College.

"I know him well enough to know that this was very personal for him," Sanders told MSNBC host Chris Hayes. "That he is disgusted, he is angry, he is sick and tired -- as we all are -- of sending our condolences to the families of people who have been murdered in cold blood."

The remarks echoed Obama's statement earlier in the day that "our thoughts and prayers are not enough" following the attack, which was reportedly committed by 26-year-old Chris Harper Mercer. Ten people were killed, including the purported gunman, and seven others wounded in the attack.

The senator, who is campaigning for the Democratic Party's presidential nomination, called for the elimination of a loophole allowing unlicensed firearm vendors to sell guns at gun shows, and for the implementation of an "instant background check" at regular gun stores.

"We have to stop shouting at each other. We need sensible gun control legislation -- and by the way, we need to significantly improve mental health services in the United States," Sanders said. "And I pledge to do everything I can in both of the areas."