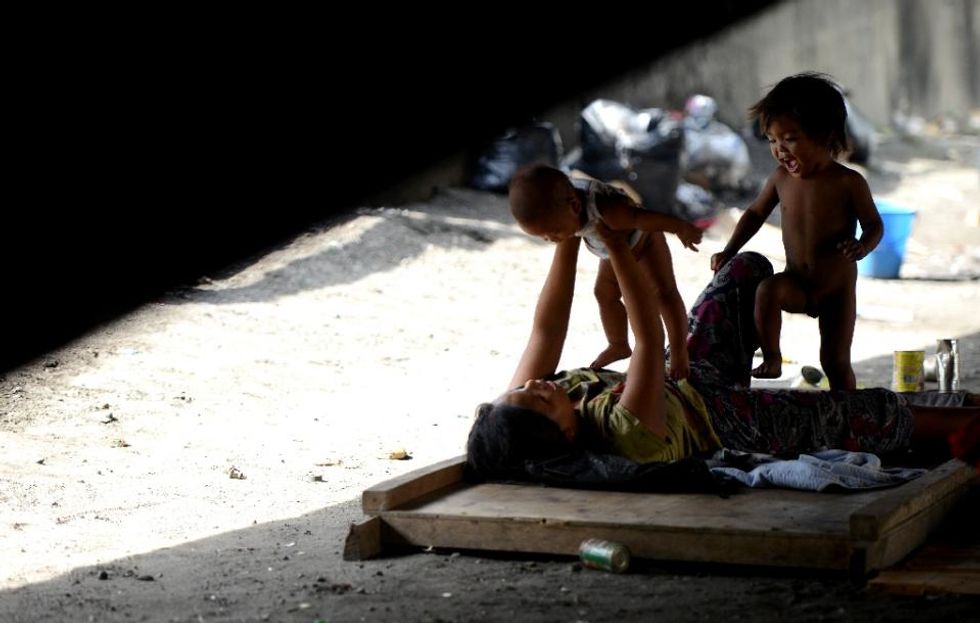 Image: A homeless woman plays with her children under a flyover in Manila on August 25, 2015 (AFP Photo/Noel Celis)

Extreme poverty will this year fall to less than 10 percent of the global population for the first time, although there is still "great concern" for millions in Africa, a World Bank report said Sunday.

"This is the best story in the world today -- these projections show us that we are the first generation in human history that can end extreme poverty," said Jim Yong Kim, president of the World Bank, which holds its annual meetings October 9-11 in Lima, along with the IMF.

According to World Bank projections, about 702 million people, or 9.6 percent of the world population, will live below the poverty line this year, mostly in Sub-Saharan Africa and Asia.

According to Kim, the continuing decline in extreme poverty is the result of dynamic economic growth in developing nations and investment in health and education, as well as social safety nets that prevented millions of people from falling back into poverty.

"This new forecast of poverty falling into the single digits should give us new momentum and help us focus even more clearly on the most effective strategies to end extreme poverty," he said.

Previously, people living on $1.25 or less a day were defined as living in extreme poverty. That figure is now $1.90, to reflect inflation.

The report comes after world leaders last month pledged to end extreme poverty within 15 years, adopting an ambitious set of United Nations goals to be backed up by trillions of dollars in development spending.

Releasing the figures, the World Bank nevertheless urged caution, saying "major hurdles remain" in the goal to end poverty by 2030.

"The growing concentration of global poverty in Sub-Saharan Africa is of great concern," it said in a statement.

"While some African countries have seen significant successes in reducing poverty, the region as a whole lags the rest of the world in the pace of lessening poverty."

The report singled out Madagascar and the Democratic Republic of Congo as particularly worrisome examples of deprivation in Africa.

It also cautioned that reliable current data was not available in part of the Middle East and North Africa because of conflict.

In contrast, the report noted a marked decline in extreme poverty in Asia -- particularly India -- and in South America.

However, Kaushik Basu, chief economist at the World Bank, sounded an alarm over a slowdown in emerging markets worldwide -- with Latin America an emblem of the sputter.

"There is some turbulence ahead," said Basu.

"The economic growth outlook is less impressive for emerging economies in the near future, which will create new challenges in the fight to end poverty and attend to the needs of the vulnerable, especially those living at the bottom 40 percent of their societies."

Oxfam welcomed the landmark figures below 10 percent, but warned that hard work remains to drag the remaining 702 million people out of extreme poverty.

"That figure remains unacceptably high and much remains to be done," said Nicolas Mombrial, head of Oxfam International's Washington office.

"A lot of new resources and fundamental political change are needed."