Wreckage found beneath 15,000 feet of water believed to be of cargo ship El Faro 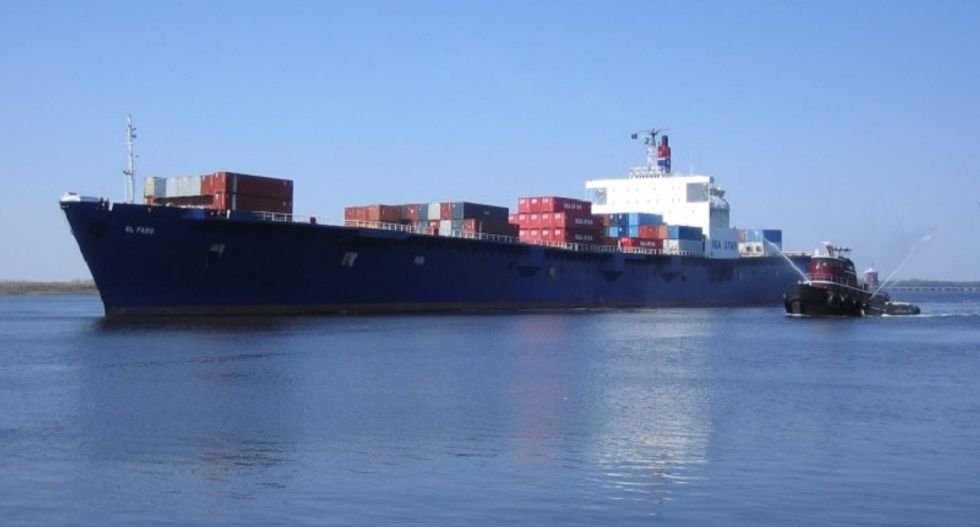 The El Faro is shown in this undated handout photo provided by Tote Maritime in Jacksonville, Florida October 2, 2015. REUTERS/Tote Maritime/Handout via Reuters

Wreckage believed to be of the cargo ship El Faro, which was lost off the Bahamas along with its 33 crew members during Hurricane Joaquin, was discovered on Saturday at a depth of 15,000 feet (4,572 meters), U.S. officials said in a statement.

El Faro disappeared on Oct. 1 while en route from Jacksonville, Florida, to Puerto Rico and sank after the captain reported a "hull breach" and said a hatch had blown open.

A search team aboard the U.S. Naval Ship Apache using sonar equipment towed from the vessel discovered the wreckage on Saturday in the area of El Faro's last known position, the National Transportation Safety Board (NTSB) said in a statement.

The NTSB statement said officials planned to send a deep ocean remotely operated vehicle as early as Sunday to confirm the identity of the wreckage.

The wreckage is consistent with a 790-foot (241-meter) cargo ship and appears to be in an upright position and in one piece, the NTSB statement said.

If the vessel is confirmed to be El Faro, a video camera mounted on the remotely operated vehicle will be used to document the wreckage and the surrounding debris field and locate the ship's voyage data recorder, the statement said.

Most of the 33 crew members were American.

El Faro's owner Tote Services Inc filed for protection in federal court in Florida on Friday, citing U.S. maritime law and saying the ship was "seaworthy and properly manned" and that the company bears no responsibility for its loss.