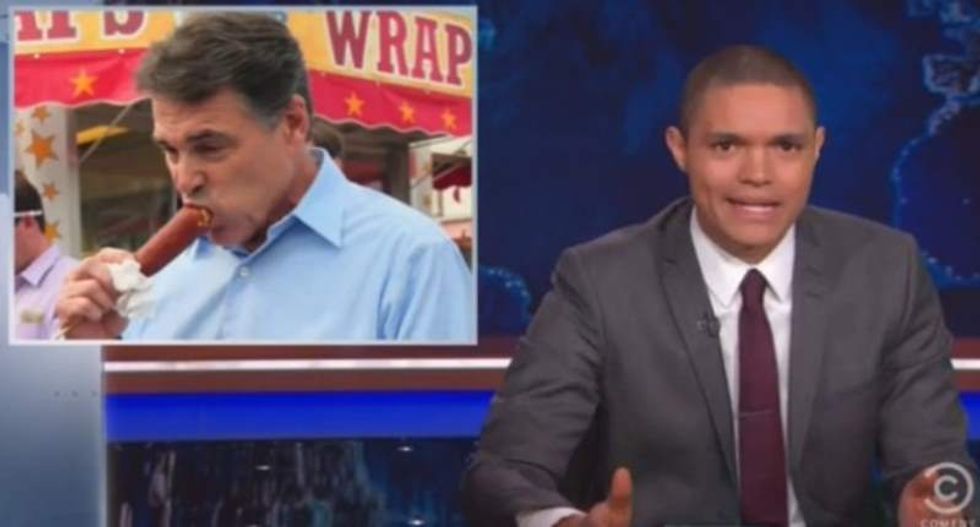 "You don't want people making fun of your terrible candidates and your ridiculous event," Noah said to state party chair Jeff Kaufmann. "As far as I'm concerned, the Iowa GOP can suck its own caucus."

As the Des Moines Register reported, Kaufmann's group shut Noah's show out of the Growth and Opportunity Party over the weekend, saying that he was afraid the program would ridicule Iowa itself.

"I bet we've got 10 or 15 Democrat-oriented blogs, liberal blogs," Kaufmann argued. "But anybody that I think is going to make fun of Iowa -- they're unwelcome."

Noah noted that without being able to put correspondent Jordan Klepper at the scene, it would have been hard to make fun of the event's Halloween theme, which included a scarecrow made up to look like Democratic candidate Hillary Clinton.

At the same time, Noah said, his problem was not with Iowans.

"It's with its bloated role in the American election," he argued. "I don't understand, especially because Iowa's Republican caucus stopped mattering years ago. It in no way determines the party's nominee, let alone the general election winner. And if you don't believe me, just ask the last two winners: not-President Mike Huckabee and even-less President Rick Santorum."