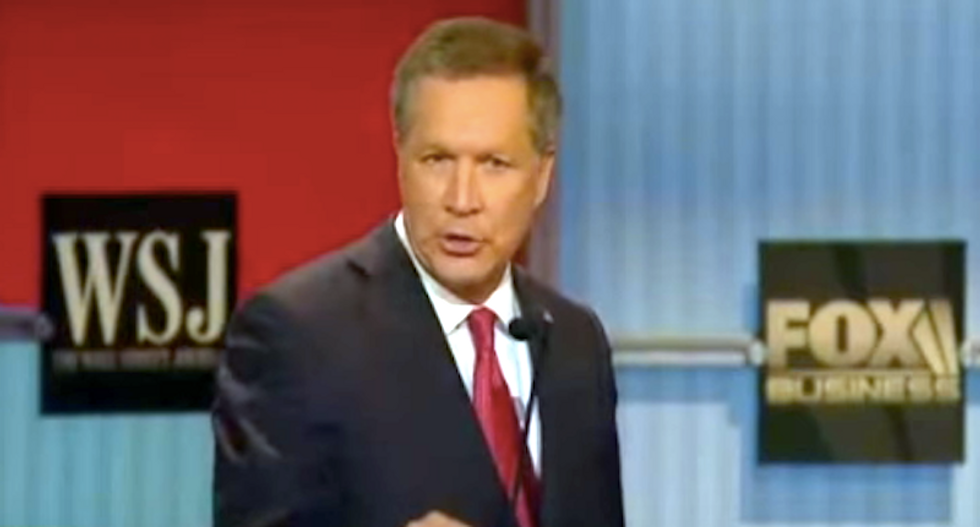 John Kasich came out swinging Tuesday night during the fourth Republican presidential debate, and he won some unlikely praise -- although the bar was admittedly set low by his rivals.

Kasich and Bush, gotta give 'em credit on immigration, trying to start a "Republicans who believe in Reality" movement. Good luck with that.
— Bill Maher (@Bill Maher)1447209749.0

I don't agree with Kasich on many issues. But he comes across as thoughtful and reasonable tonight. #GOPDebate
— deray (@deray)1447208187.0

I disagree with John Kasich. But at least he's experienced and doesn't sound insane when he speaks.
— Marc Lamont Hill (@Marc Lamont Hill)1447208141.0

However, Twitter conservatives trashed the Ohio governor after he slammed Donald Trump's plan to deport 11 million people as "silly," inhumane and logistically impossible.

John Kasich and Jeb Bush we are sick of illegals invading our towns, our cities, our borders. Repatriate them to their home countries now
— Durie Foster Jr (@Durie Foster Jr)1447251306.0

@megynkelly Gov Kasich was FAR STAGE LEFT for a reason, hes also a total whiner. FOR THE CHILDREN? come on, is sally Struthers his advisor?
— History Matters (@History Matters)1447220105.0

Many conservatives complained that Kasich, who hosted a Fox News program for six years until he was elected governor, was given too much time to speak by Fox Business.

By my calculations, Kasich has had 57 minutes of speaking time tonight
— Allahpundit (@Allahpundit)1447213656.0

@rupertmurdoch @realDonaldTrump Trump should have walked out. Your Moderators let Kasich take over. The other Candidates are owed an apology
— Teresa (@Teresa)1447251220.0

Both rank-and-file and name-brand conservatives said Kasich's campaign was doomed after his debate performance.

Conservative begged Republicans not to flee the party after Jan. 6 – now he's leaving it himself

On Wednesday, writing for The Arizona Republic, tech lawyer and conservative columnist Robert Gonzalez — who just months before published another op-ed urging wavering Republican voters to stick out the chaos in the GOP and reform it from within — announced that he has had enough, and is leaving the party himself.

"I hoped that the extremism we were seeing – those questioning the results of the 2020 election, those advocating against a peaceful transition of power, those defending the terrorists who attacked the Capitol on Jan. 6, those ignoring science and advocating for horse dewormer as a public health measure – was a fringe element," wrote Gonzalez. "While many Republicans failed to show leadership during Trump's presidency, it seemed that in the wake of Jan. 6, those leaders would finally stand up for truth and democracy. I was wrong."

“I do not have any details to share about the governor's personal medical decisions. As the governor has said, each person should be able to make his or her own informed choices," Press Secretary Christina Pushaw said via email last week in response to a question from the Phoenix.

Former Donald Trump chief of staff Mark Meadows has retained a top Republican attorney to represent him before the House Select Committee to Investigate the January 6th Attack on the U.S. Capitol.

"Two people familiar with the matter told POLITICO that George Terwilliger, the deputy attorney general during the George H. W. Bush administration, is representing Meadows for the select committee's inquiry into the Capitol attack. Terwilliger confirmed that he represents Meadows, who did not respond to a request for comment," the publication reported Wednesday.