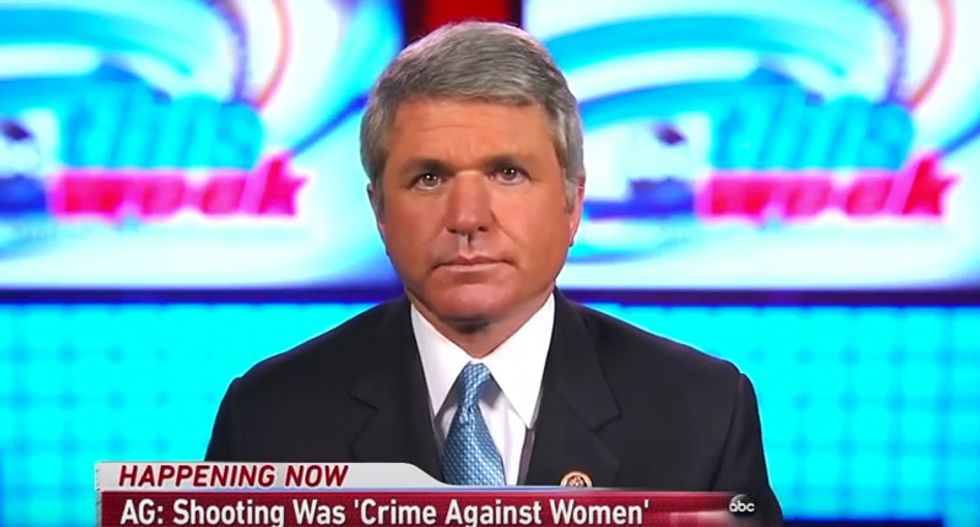 Calling the attack on a Colorado Planned Parenthood clinic more of a "mental illness" issue, the Republican chair of the House Homeland Security Committee refused to describe the assault that left three dead and eight wounded as "domestic terrorism."

Speaking with Martha Raddatz on ABC's This Week, Rep. Michael McCaul (R-TX) -- who is virulently anti-abortion -- said he would leave the call on Robert Lewis Dear's shooting rampage at the Colorado Springs  health clinic to the Justice Department.

"It's a tragedy. It's, I think, a mental health crisis," said McCaul, adding, "I don't think it would fall under quite the definition of domestic terrorism, although I'll leave that to the Justice Department to make that determination."

McCaul, whose antipathy towards abortion has included opposing federal funding of Planned Parenthood and voting against allowing human embryonic stem cells to be used in research, hasn't always been so sanguine about terrorism in the U.S.

Previously the Texas lawmaker has warned of "lone wolf" attacks in the U.S., singling out ISIS and saying Americans could be "radicalized" by what they can access on the Internet.

"We worry a lot about ISIS traveling overseas from Syria to the United States, but I think one of the greatest fears are those already within the U.S. who are being radicalized and inspired by the ISIS propaganda that’s out there on the Internet," McCaul said in an interview with ABC in 2014. "They are waging a campaign of war against the West and the U.S."

In Sunday's interview, McCaul made no mention of the widely-viewed and highly-edited videos attacking Planned Parenthood for supposedly selling fetal tissue for profit, posted on the Internet by the anti-abortion group Center for Medical Progress.

According to authorities, Robert Lewis Dear told investigators "no more baby parts" as he was led away following his arrest.