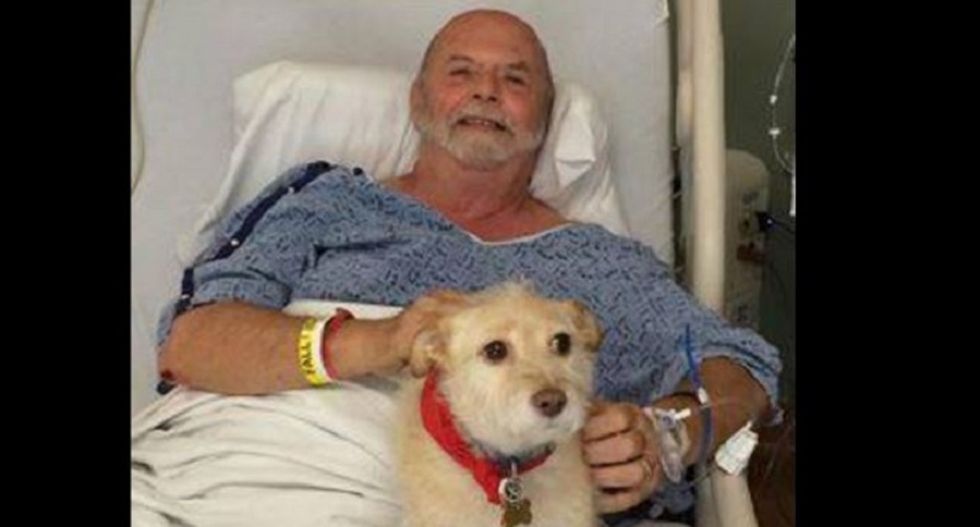 George Zander recovering in the hospital with canine friend (Facebook)

An LGBT rights activist and his husband were violently assaulted and hospitalized on Sunday in what authorities are calling a hate crime.

George Zander, a 71-year-old activist with Desert Stonewall Democrats had his hip broken and is undergoing surgery while his spouse, Chris, suffered a concussion and needed sutures in his scalp and lip after the attack, local CBS2 reports.

The couple was holding hands and leaving a night club when the suspect, described as a white male, started yelling anti-gay slurs and attacking them. Chris Zander told the man he didn't want to fight. The suspect left and came back with two friends who sneaked up on the Zanders and attacked them again, the station reports.

They hit Chris in the head with a bottle, while George was pushed down, resulting in a hip fracture.

"We feel so safe here, and it's a wake-up call, that we are not as safe as we think," Ruth Debra, DSD chair, told the Desert Sun. "This was very specifically a hate crime."

George is a member of DSD's steering committee, and the group is trying to raise $5,000 to match the reward offered by a donor to apprehend the suspects.

"It was complete anger, it was just anger," Chris Zander told the Sun. "I don't understand why somebody would push a 71-year-old man over. It makes me want to cry every time I talk about it."

While George suffered a double fracture, the Sun reports he is expected to make a relatively quick recovery.

Palm Springs is generally an LGBT-friendly city, but the attack on the Zanders is the second hate crime this year.

"Even in the most accepting of places, hate crimes are committed against LGBT people," Mike Thompson, CEO of the LGBT Community Center of the Desert, wrote in an email to the Sun. "It's especially sobering when it happens here, in Palm Springs, on Arenas Road, both places where LGBT people are beyond accepted, we are celebrated."