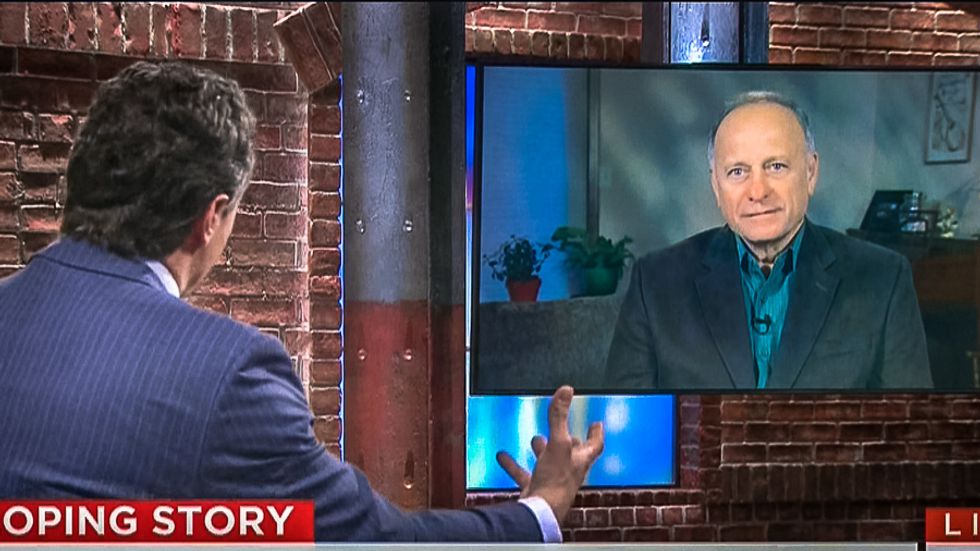 CNN host Chris Cuomo pushed back against Rep. Steve King's anti-immigrant rhetoric on Tuesday after the congressman claimed that Syrian refugees should be turned away because no one from the Middle East had ever successfully assimilated into another country.

"It isn't about if we can vet them or not, we simply can't," King insisted. "But we know if we bring in people from that part of the world, some of them will become terrorists. If they aren't when they arrive, a number of them will be afterwards."

Cuomo, however, pointed out that there was no evidence that Syrian refugees would become radicalized after moving to the United States.

"If you are going to make the case that, well, if we can't vet them completely, they shouldn't get in then there are a lot of other populations you should start with before the Syrian refugees because you have less vetting of other groups of immigrants," Cuomo explained. "And you have much less favorable statistics of what happens once they get here."

"You know, Syrian refugees, you can almost point to not a single fact that has been shown to make them a threat in this country," the CNN host said.

According to the Iowa Republican, the migration of Syrian refugees was a plot by radical imams to "spread their version of civilization."

"There's no assimilation taking place here, and no one has shown me an example of people from that part of the world that have assimilated into the broader society," King argued. "And so what we're about here is building a culture in America that honors Americanism. And people who want to come here to become American and then can contribute to this country, we should welcome them."

Cuomo noted that only about a dozen of the 785,000 refugees who had migrated to the United States following the attacks of Sept. 11, 2001 had been arrested or removed due to involvement in terrorism.

"That's a one in 100,000 chance of someone being affiliated with terror, so certainly you do have refugees coming here to do what you call Americanism," Cuomo remarked. "I just don't see the factual basis for excluding an entire class of desperate people."

Instead of offering immediate help to refugees, King said that the better plan would be to "defeat the caliphate" so people could return home.

And while King admitted that 10,000 refugees was a "drop in the bucket," he contended that "we're in a new world" of terrorism.

"They believe that they can go to heaven if they kill us," he opined.

"We understand the madness," Cuomo agreed. "The question is, is the solution to blame the victim?"