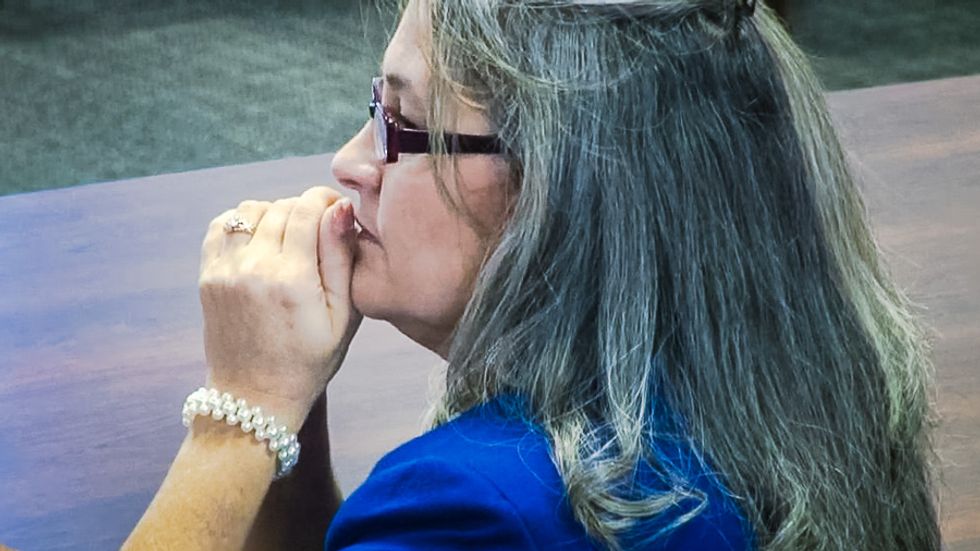 A Georgia mother was found guilty this week on 28 counts related to child abuse, including forcing her adopted daughter to go days without water and putting a gun to the girl's head.

Earlier this month, the teen told a jury in Butler, Georgia how her mother, Diana Franklin, had put her in isolation after she came to live with them at the age of 9, according to the Ledger-Enquirer.

The girl said that Franklin homeschooled her and sometimes took her to Civil War reenactments, but she also brutally punished her for temper tantrums and hoarding food.

She said that she was 15 years old when Franklin put a small caliber pistol to her head for threatening to run away. Franklin warned her that she could bury her body on the family's 73 acres of land outside of Butler where no one would find her body.

“I was scared,” the girl testified. “I knew she was capable of anything.”

Franklin later wrote in her journal that God had stopped her from doing something "stupid."

The girl told the court that she would be tied to a tree and punished with a shock collar designed for dogs if she ate her food too quickly. Franklin told her that she was being treated like a dog because she acted like one.

On other occasions, Franklin would make the girl lie naked on her stomach for beatings with the strap or the buckle of a belt.

The teen said that Franklin once locked her in a chicken coop for three days without food or water. In one case, she recalled being confined to a closet with only a Bible, bread and water. Her mother also locked her in a shipping container, a cinder block garage and an outhouse. She said that she often had no clothing, food or water.

During closing statements on Monday, Kevin Bradley argued that the girl, now 18, had inflated the claims to profit off of a book deal.

“She continues to revel in the attention,” Bradley said.

“With all the hell she went through, she ought to write 10 books,” prosecutor Wayne Jernigan shot back.

The jury found Franklin guilty on all 28 charges, which included 19 counts of first-degree cruelty to children and eight counts of false imprisonment. She was also found guilty on one count of aggravated assault. She faces a maximum penalty of 480 years in prison.

The judge denied a request to allow Franklin to remain free through Thanksgiving.

Franklin is scheduled to be sentenced on Dec. 8. Her attorney has said that he will appeal for a new trial.

A Texas man who yelled racial slurs before opening fire outside a bar in Tampa, Florida has been arrested, ABC 13 reports.

Dustin McCann, 30, was charged this Tuesday with four counts of aggravated assault with a firearm and one count of discharging a firearm from a motor vehicle.

French lawmakers voted on Thursday to enshrine abortion rights in the constitution, with MPs on the left and centre saying the US Supreme Court's overturning of a landmark ruling in June showed the need for new steps.

The vote in the National Assembly, France's lower house of parliament, marks only the first step on the path to enshrining the right to abortion in the constitution.

A new report from the Arizona Republic sheds more light on the coalition of voters who sunk Trump-backed Kari Lake's hope of becoming Arizona's next governor.

Essentially, the newspaper found that a significant number of Republican voters in the state crossed over to back Democrat Katie Hobbs in this year's elections, and they also helped put nails in the coffins of fellow MAGA candidates Blake Masters and Mark Finchem.