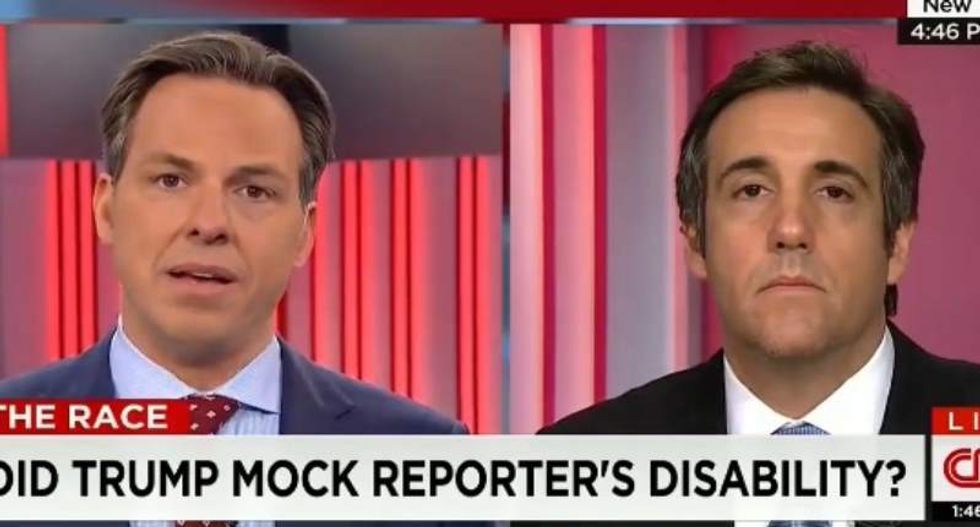 CNN host Jake Tapper was visibly exasperated at times on Monday while clashing with a campaign advisor for Donald Trump insisting that the GOP front-runner was not making fun of reporter Serge Kovaleski during an event last week.

"He said, 'You gotta see this guy,' and then he mimics his injury," Tapper said.

"He was being gesticulate, which Donald Trump is," Cohen argued. "And he was basically showing the exasperation of a reporter that's pulling back on a story and basically saying something like, 'Now I don't remember.'"

Tapper showed footage of Trump making fun of Kovalevski, as well as a side-by-side photo of the candidate next to the reporter, whose arm is curved unusually because of a condition called arthrogryposis.

The real estate mogul has argued that a Washington Post report by Kovalevski shortly after the 9/11 attacks vindicates his claim that "thousands" of Muslims celebrated the incidents.

On this matter, Cohen insisted that Trump remembered the alleged celebrations accurately.

"I've worked for Mr. Trump now for a long time, and I can tell you that Mr. Trump's memory is fantastic," said Cohen, who is an attorney for Trump. "I've never come across a situation where Mr. Trump has said something that's not accurate."

"Seriously?" Tapper responded. Later, the host called Cohen out again for trying to say that Trump never remembered meeting Kovalevski, who has covered him several times during his career.

"Do you know, Jake, how many people have covered Donald Trump in the past?" Cohen asked. "Thousands upon thousands."

"How many with that disability? I would guess one," Tapper shot back.

"Do you really think that Mr. Trump remembers this specific reporter?" Cohen said. "Mr. Trump himself said he does not remember this reporter."

Earlier this year, Trump's campaign said Cohen did not speak for the candidate after the attorney argued that marital rape did not exist, while also telling a Daily Beast reporter, "I'm going to mess your life up" if he wrote about allegations that Trump raped his former wife Ivana.