Colbert pounds Ohio Gov. Kasich over pot legalization: You're 'ruining people's lives' by locking them up 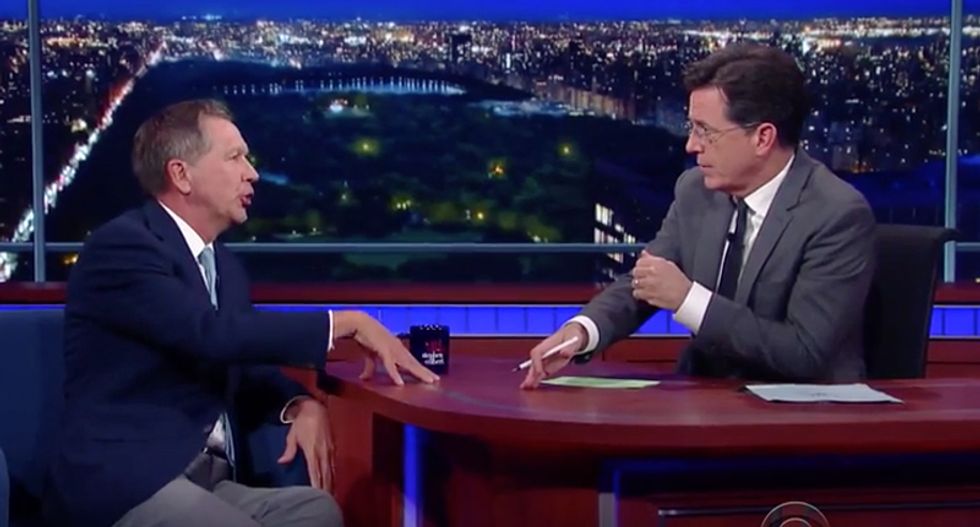 On The Late Show, host Stephen Colbert took Ohio Governor and GOP presidential candidate John Kasich to task over a recent initiative to legalize pot in Ohio that ultimately failed.

“I know this is a dirty word when you’re running in the Republican primary, but you seem reasonable," a smiling Colbert began.

He then pressed Kasich on the failed marijuana initiative, noting that the governor campaigned against full legalization while allowing flexibility for medical marijuana if doctors call for it.

"We have a huge drug crisis in this country," Kasich explained.

"Is it really pot, the drug crisis?" Colbert interrupted. "Lots of people are going to jail for minor drug infractions, and it ruins their entire life."

"We don't do that in Ohio, ok?" Katich said, adding that he has no interest in seeing minor drug offenders going to jail.

"The problem with marijuana is this: We don't want to tell our kids, 'Don't do drugs, but by the way, this drug's ok,'" Kasich continued.

"Isn't that what alcohol is?" Colbert asked to applause and laughter. Colbert added, “I want to be clear, I’m not arguing for legalizing heroin.”

Kasich later admitted to Colbert that he had smoked pot when he was younger, at which point Colbert pointed out that -- had he been caught by the police -- he may never have been able to become governor because of his criminal record.