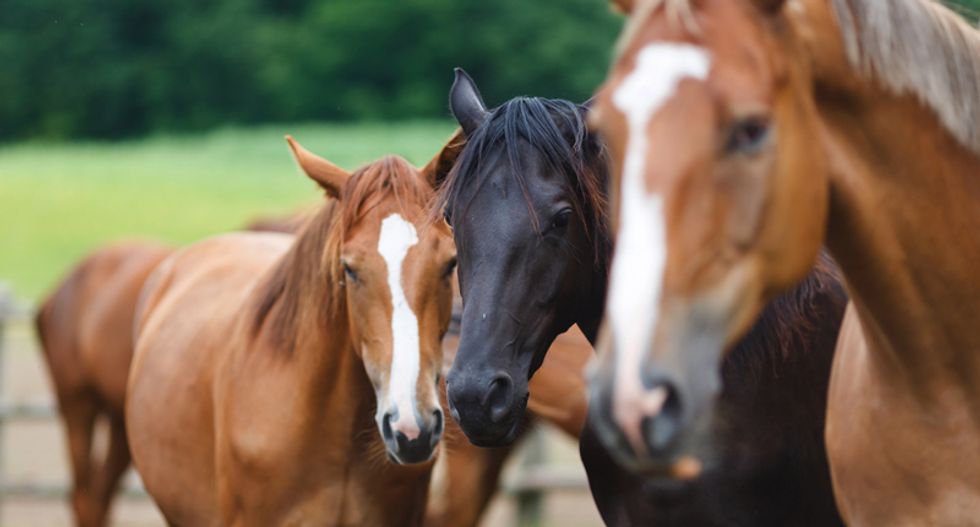 The Bureau of Land Management (BLM), the federal agency tasked with sustaining the health, diversity, and productivity of America’s public lands, has been implicated in a scheme to illegally sell captured wild horses to a Colorado rancher, who then sold the animals for slaughter.

One of the BLM’s duties is to protect the herds of wild horses that roam freely in the Southwestern Unites States. However, an investigation by the Office of the Inspector General of the U.S. Department of the Interior revealed that the BLM had sold approximately 1,800 wild horses to rancher Tom Davis, who then promptly sent the horses to be slaughtered in Mexico.

“Managers … failed to enforce [Bureau of Land Management] policy of limiting the sales of horses and ensuring that the horses went to good homes,” the report released late last month found.

The investigation also revealed ominous connections between Davis and the former Secretary of the Interior Ken Salazar, but were unable to find conclusive proof of a conspiracy.

The BLM Office of Law Enforcement had investigated similar claims in June of 2012, but were unable to determine if the horses sold to Davis were ultimately being sent to slaughter, according to the Inspector General’s report.

The Colorado rancher and livestock hauler admitted to investigators with the Interior Department Inspector General’s office that “probably close to all” of the horses were resold for slaughter and that he assumed they would be killed.

There was “only one place to go … to the kill plant,” Tom Davis of La Jara, Colo., told investigators, whose findings confirmed longstanding fears of animal welfare groups, wild-horse activists and officials with the Bureau of Land Management’s Wild Horse and Burro Program, which manages thousands of horses that roam wild in the West.

The report indicated that Davis illegally bought 1,794 wild horses between 2008 and 2012 for $10 a piece, with federal officials spending over $140,000 dollars to deliver the animals to him.

The BLM administers over 245 million surface acres of public land, more than any other federal agency in the United States, with most of the land located in the 12 Western states, including Alaska.

These recent reports indicate blatant disregard for the Wild Free Roaming Horses and Burros Act of 1971, which stated that, “wild free-roaming horses and burros are living symbols of the historic and pioneer spirit of the West; that they contribute to the diversity of life forms within the Nation and enrich the lives of the American people; and that these horses and burros are fast disappearing from the American scene. It is the policy of Congress that wild free-roaming horses and burros shall be protected from capture, branding, harassment, or death; and to accomplish this they are to be considered in the area where presently found, as an integral part of the natural system of the public lands.”

The BLM attempts to maintain a façade of being the protector of nature, justifying their actions by claiming they are preventing overpopulation and keeping herd numbers stable and manageable.

While the BLM masquerades as a protector of nature, in reality they have culled large populations of wild horses, virtually eradicating them from large swaths of public lands.

Since passage of the Wild Free Roaming Horses and Burros Act, the BLM has removed close to 300,000 of these majestic beasts from public lands designated as habitats for them by Congress, completely eliminating them from over 20 million acres of public lands.

Revealing the depth of the systemic corruption, the Office of the Inspector General referred this case to the U.S. Attorney’s Office for the District of Colorado as well as the State of Colorado Conejos County District Attorney’s Office, which both declined civil and criminal prosecution of the case.

“It took more than three years for the [inspector general] to confirm what we’ve always known – that the [Bureau of Land Management] sold 1,795 federally-protected wild horses to a known kill buyer who sold them to slaughter,” Suzanne Roy, director of the American Wild Horse Preservation Campaign, said in a statement.

“Unfortunately, there will be no justice for these mustangs, who suffered a brutal death in Mexican slaughter plants. No one at the [bureau] is being held accountable for this betrayal, and Tom Davis is not being prosecuted for violating his contractual obligation to not sell the horses for slaughter.”

Everyone connected to the selling of wild horses to Davis claimed ignorance, thus no one has been held responsible. This case serves to highlight the massive levels of corruption and inefficiency within the U.S. bureaucracy.