Fox host loses it with war hero Dem lawmaker: Will you take responsibility if a refugee kills an American? 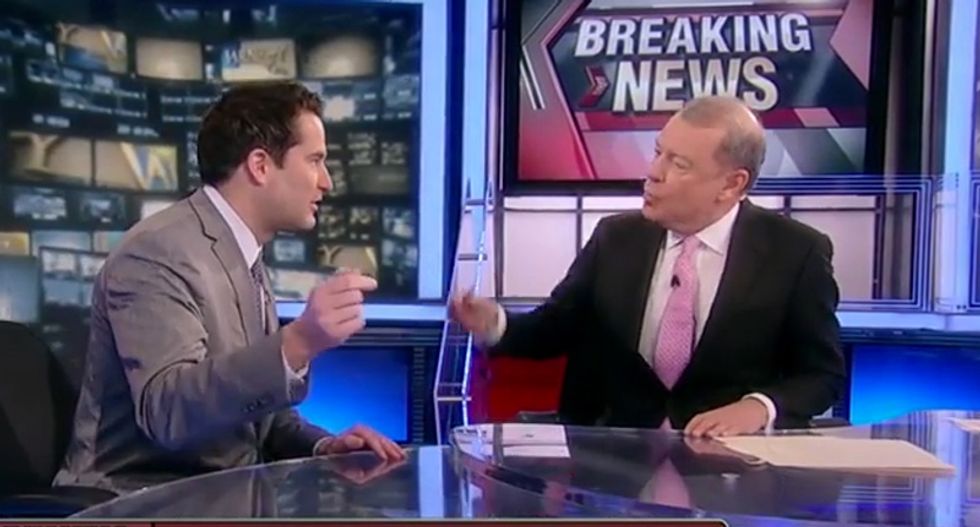 A Democratic lawmaker who was twice decorated for heroism fighting in Iraq in 2004 and 2004 --earning him the Bronze Star  and the Navy and Marine Corps Commendation for valor -- came under fire from a foe closer to home when he was attacked by a Fox News host for refusing to vote  for a bill banning Syrian refugees from the U.S.

Appearing on Fox Business, Rep. Seth Moulton (D-MA) said he couldn't support a bill sponsored by Republicans that would push "pause" on accepting refugees from the war torn Middle East.

“Passing this bill is playing right into ISIS’s hands,” Moulton said. “You are making it easier for ISIS to recruit people here at home.”

An excitable Stuart Varney lost it as Moulton attempted to explain his position over Varney's interruptions.

"It increases our population!" Varney insisted before asking, "We take the risk on your behalf?"

Varney continued to assert that expanding the number of Muslims in America makes the country less safe.

"What radicalizes [Muslims in the U.S.] is saying they are different, " Moulton attempted to explain. "That is exactly what ISIS wants, that's what they need as a propaganda tool to radicalize."

Moulton also had to explain that refugees already go through a comprehensive process before being admitted to the country, with Varney asking, "Are you sure of that?" to which Moulton, answered, "Yes."

"If one of those people comes into America that you want to bring in here, and one of them kills an American, will you take responsibility for that?" Varney bellowed.

"What happens if ISIS uses this bill to radicalize people here at home?" Moulton responded.

After Varney repeatedly badgered the vet with his question, Moulton replied, "I fought these guys overseas, I get what it means. I'm not going to vote for something that plays into the hands of ISIS."