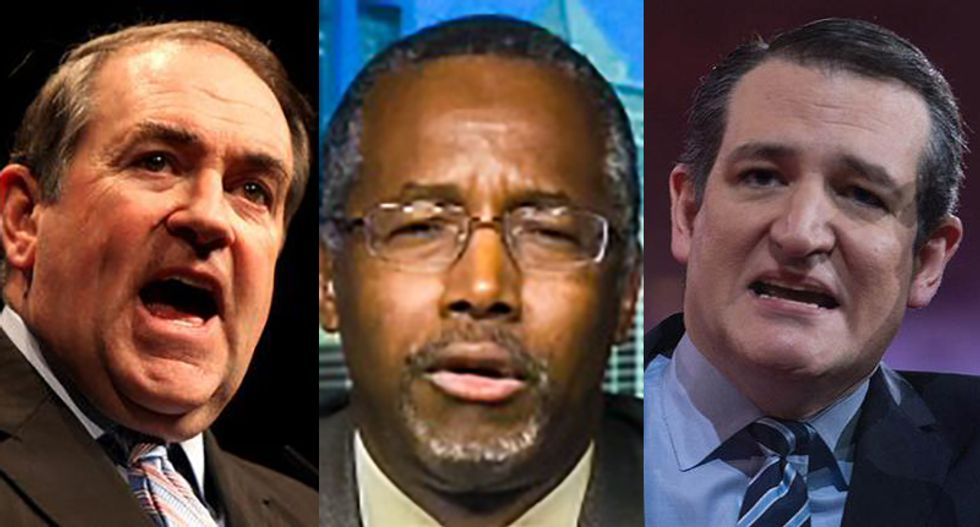 Republicans flooded the airwaves Sunday morning, variously criticizing their Democratic counterparts for failing to use the term "radical Islam," and faulting the administration for not putting "boots on the ground" in Syria while warning of another 9/11 attack in the U.S.

"It's become apparent on the Democratic side, whether it is the current president or the one who wishes to be president, they're more interested in protecting the image of Islam than they are protecting Americans," Huckabee told Fox News host Tucker Carlson.

On ABC's This Week, Florida Senator Marco Rubio echoed those sentiments by criticizing former Secretary of State Hillary Clinton for her nuanced approach -- and then immediately invoking the Nazis.

"That would be like saying we weren’t at war with Nazis, because we were afraid to offend some Germans who may have been members of the Nazi Party but weren’t violent themselves," Rubio told host George Stephanopolous. "We are at war with radical Islam, with an interpretation of Islam by a significant number of people around the world, who they believe now justifies them in killing those who don’t agree with their ideology. This is a clash of civilizations."

According to the Washington Post, Ted Cruz also attacked President Obama, saying, “I recognize that Barack Obama does not wish to defend this country. He may have been tired of war, but our enemies are not tired of killing us. And they’re getting stronger.”

On Facebook, former HP CEO Carly Fiorina spread blame all around, attacking President Obama for planning to accept Syrian refugees while saying Clinton's response to the attack at the Benghazi compound in 2012 was an invitation to "more terrorism and bloodshed."

Other candidates piled on the refugees, with former Florida Governor Jeb Bush saying he would only allow Christian immigrants from Syria into the U.S.

Retired neurosurgeon Ben Carson said he would be very selective about which refugees he accepted by relying on his highly developed frontal lobes to "extract information from the past [and] present, process it, and project it into a plan,” for dealing with refugees.

South Carolina Senator Lindsey Graham limited his comments to proposing that the U.S. put "boots on the ground" in Syria while darkly warning that failure to do so could lead to another 9/11, the The Hill reports.

"You can say what you want, but if they had guns -- if our people had guns, if they were allowed to carry -- it would have been a much, much different situation," Trump told a Texas audience Saturday afternoon, reports the Washington Post.