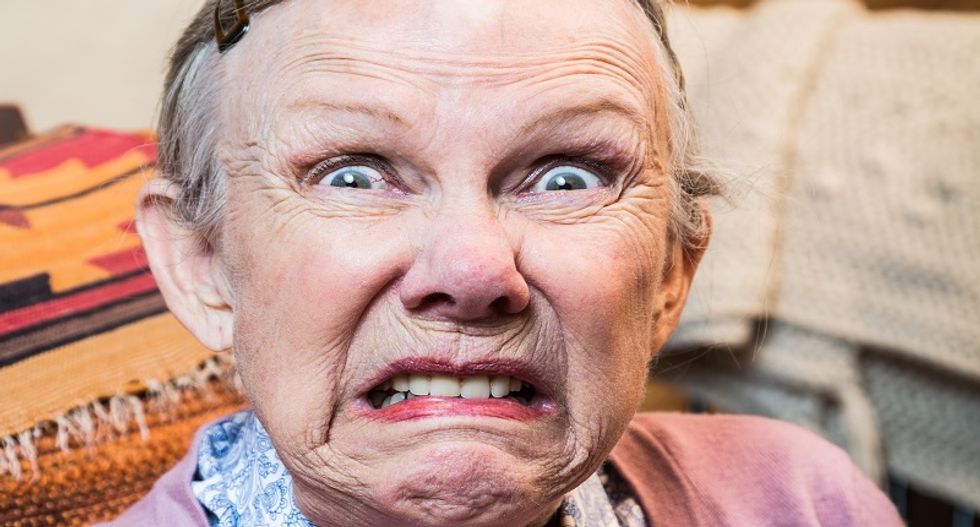 Ah, Thanksgiving -- that time of year when families gather around a table to share each other's company and feast. And of course, argue.

Let's face it. There's no avoiding the fact that your racist aunt is going to not only show up, but also drink too much Prosecco. You may try to ignore it, but as the evening wears on, something is going to get under your skin. Here are some things we predict, based on our highly-scientific casual observations of Twitter racists and Fox News discourse, we predict your "totally not racist" aunt is going to say on Thursday.

As a service to you, our readers, we have prepared a list of the things your aunt may say, so that you can mentally prepare yourself -- because the only thing less productive than a political argument with your tipsy, racist family members at a holiday gathering is arguing with them Facebook.

For the purposes of this list, let's just call her Auntie Alabaster Hayseed.

1. Syrian refugees are "invading" US: What worse dinner conversation could there be, other than to parrot this favorite conservative talking point that paints desperate people, a large number of whom are children, fleeing war and violence as evil terrorists who are not coming for safety, but instead to destroy America? Rest assured, just because the topic should be taboo, that won't stop Auntie Alabaster Hayseed. This topic is of course directly tied in with Auntie A's other favorite talking point, that all Muslims are terrorists. You may know that nothing Auntie A says is true, but the more you argue with her, the more entrenched her stance will become. In fact, if you look at the back of wine bottles, they are all marked with the warning: "Calcifies offensive points of view."

2. Muslims "cheered" on 9/11: This unfortunately leads us to recent claims by the racist-aunt-id-incarnate leading the GOP candidate pool, Donald Trump. Trump said he saw "thousands" of Muslim people cheering in New Jersey on September 11 when the World Trade Center buildings collapsed. Police and reporters who ran fact checks have denied it happened, as have members of the local Muslim community. Fellow GOP candidate Ben Carson, who initially backed Trump's claim, even walked it back to some degree.

But that won't stop Auntie A from insisting that Trump is correct, or even having a sudden recollection of seeing it with her very own eyes. Everything in Auntie A's world is an opinion open for dismissal, even facts.

3. Black Lives Matter protesters are the real racists: It may seem obvious to you that if "all lives" really mattered, African-American activists wouldn't have felt the need to coin the phrase "black lives matter." You may know racism is structural and has been institutionalized in the United States since its very founding. You may know that statistics illustrate it's still alive and well, and African-Americans remain victims to this day.

That's not going to stop your Auntie Alabaster Hayseed. In her opinion, black Americans are the "real racists" because they don't think "all lives matter." She probably also thinks the Confederate flag is about heritage and not racism. And maybe she's actively pushing for a Paula Deen comeback.

4. Black-on-black crime versus black-on-white crime: Over the weekend, Trump tweeted totally bogus and racially-charged statistics that feed a racist, fictitious idea that African-Americans are more violent than whites. According to PolitiFact, the statistics Trump tweeted came from a made-up organization and were wildly inaccurate. The fake statistics not only low-balled the percentage of blacks killed by whites, but grotesquely underestimated the percentage of whites killed by whites, and overstated the percentage of whites killed by blacks. Trump's statistic -- which is a favorite among white supremacists -- purposely hid the fact that murder, like most violent crime, is by far intraracial in nature -- meaning victims and perpetrators of violent crime are overwhelmingly of the same race.

But since talking about the illusion of "black-on-black crime" is usually a method for racists to annul themselves of social responsibility toward equality, don't expect your Auntie A to give it up easily. Remember, facts in her world, or just opinions with fancy words attached to them, like "study" or "PhD" or "FBI data."

5. How "well-spoken" Ben Carson is: At some point, your Auntie A is probably going to say something about how "well-spoken" or "articulate" retired pediatric neurosurgeon Ben Carson is. Dr. Carson may say some things that are clearly far afield, but the fact remains that infinitesimally few of us are qualified to run the pediatric neurosurgery department at Johns Hopkins, as he did for 30 years. So for junior college-dropout Auntie A to render judgment on Carson's speaking abilities is not just paternal and condescending, it's also racist.

It may sound complimentary on its face, but commending African-Americans on their speech is a back-handed insult that implies by-and-large, the rest of the community does not speak articulately. This kind of thing is often said with unspoken assumptions about the intelligence of a group of people, and also the mistaken and bigoted idea that African American Vernacular English is "slang" as opposed to a linguistic distinction with set grammatical rules.

6. Obama is still probably a Muslim: This is going to be said at some point, as will the idea that Obama is not an American citizen. The words "Marxist," "tyrant," "traitor," "un-American" and "dictator" may make their way into the tirade as well. Brace yourself. Auntie A never got over the fact that we elected a black president. At some point, she is going to melt down and have a full-on unhinged attack of Obama Derangement Syndrome.

7. Obamaphones: Related to that, and perhaps immediately following the ODS spasm, Auntie A is going to launch into a conspiracy-laced treatise on how the Marxist treasonous dictator is about to start redistributing wealth by handing out free cell phones. Once this topic makes an appearance it's probably time to leave, because on deck are Jade Helm and Obama's imminent plans to invade the country he is already the leader of, along with Auntie A's countdown until Obama leaves office, coupled with a frothy escapade into fears that Obama will refuse to leave office.

8. Planned Parenthood being the real racists: What could possibly be more incendiary than conjoining the topics of racism and abortion rights? Rest assured it will happen. Conservatives love to act like they're concerned with the well-being of black people by pointing out that women's health care provider Planned Parenthood has a lot of clinics in communities of color. The rationale there is that this must prove Planned Parenthood's goal is to exterminate the African-American population. Besides ignoring the fact that Planned Parenthood offers an array of free health screenings and services, only 3 percent of which are abortions, the fact checkers at PolitiFact found that this isn't true.

But just because combining two issues that alone are the subjects of many a knock-down drag-out fight is a really horrible idea, don't expect Auntie A to avoid doing just that.