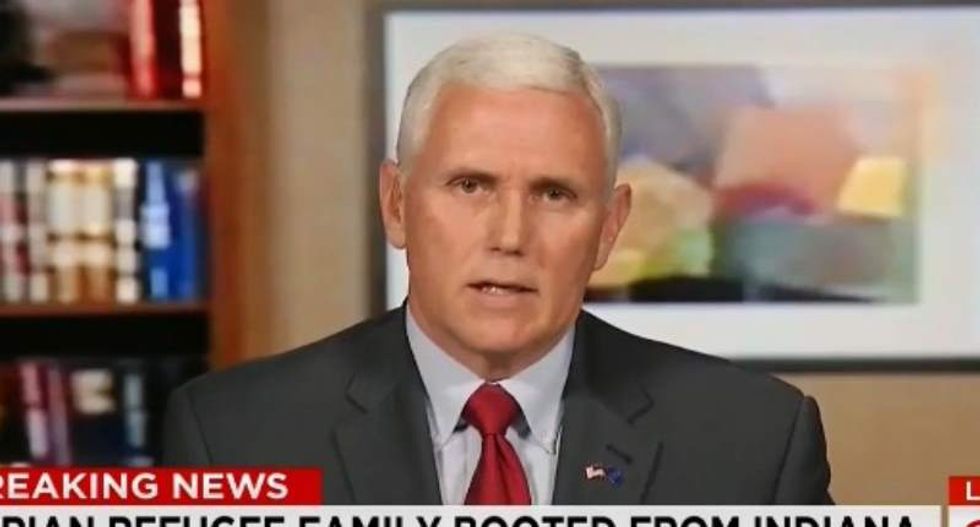 Indiana Gov. Mike Pence (R) ducked the question when CNN's Chris Cuomo asked him what specific reason he had to turn away a Syrian refugee family that was supposed to be resettled in his state.

"Why did this family have to pay the price of your uncertainty? They had been vetted for three years, this family," Cuomo said. "They had been found to not have any significant threat, obviously, which is why they were being admitted. The guy was a shopkeeper, they've got a little baby. This family did not have any earmarks of that. Why make them pay the price for your uncertainty? What fact can you point to? What do you know about these people to justify extending their distress?"

Instead of pointing to any factor relating to the family itself influencing his decision, Pence argued that Indiana had a "long tradition" of opening up its homes to refugees and said his "heart goes out" to that family and all the ones affected by the humanitarian crisis in Syria.

"At the end of the day, when you see a Syrian refugee involved in a terrorist attack in Paris, someone who gained access to the European Union under this program, and we have the leadership of our Homeland Security [department] and our FBI saying that we have serious gaps, I think it was altogether fitting that Republicans and Democrats in the Congress of the United States today voted overwhelmingly to pause this program," he said.

Pence's statement was an allusion to a vote in the GOP-dominated House earlier in the day passing a bill that would apply stricter security screenings for incoming refugees. The White House has already threatened to veto the bill.

However, the governor did not mention that all of the perpetrators connected to the attack have been identified as European nationals and not refugees.

"There's no question that Hoosier compassion is known far and wide," Cuomo responded. "But here's what you know on the facts of it: there is a lot of vetting. There's more vetting for these refugees than there is for other groups on immigration into the United States. You know that -- it's done first by the UNHCR, the high commission on human rights. They do it, it takes a long time. Then it comes to the United States, it takes a long time. We've seen that with this family. It's taken three years.

"We also know that while it's about your heart, it's hard to reconcile that with what just happened with this family," he continued. "They are in no way evidence of the threat that we saw here in Paris. They have been vetted, and there's no proof of that."

While Indiana has turned the family away, the Guardian reported on Wednesday that it was accepted for resettlement in Connecticut.

"It's the right thing for us to do to respond to this tragedy," said that state's governor, Daniel Malloy (D). said during a press conference on Wednesday. "We have an obligation to the other nations of the world to do our part."

As Cuomo spoke, the screen went dark on Pence's side of the interview, forcing the discussion to come to an end.