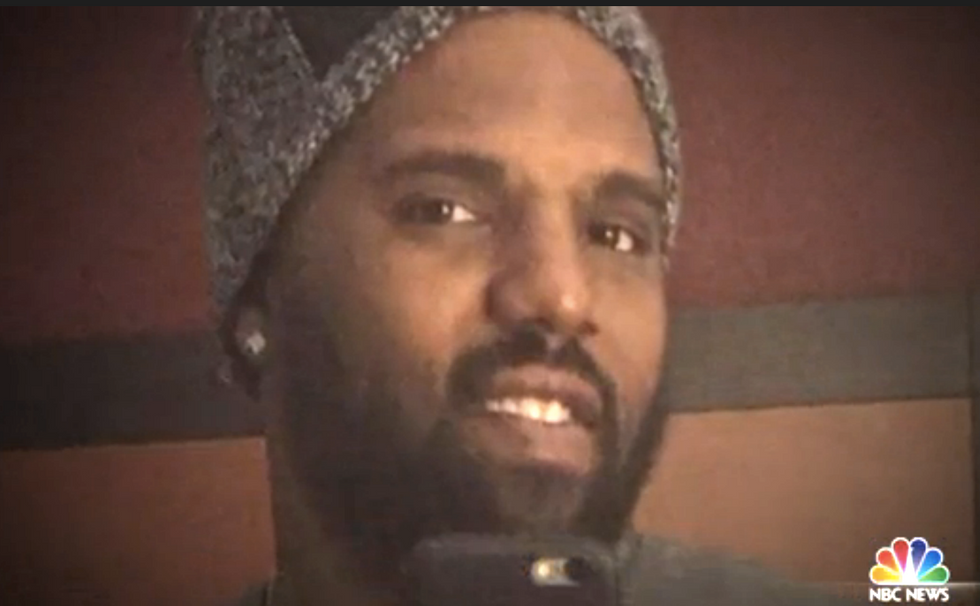 Ke'Arre Stewart, the Iraq War veteran gunned down by right-wing terrorist Robert Louis Dear on Friday, used his dying moments to tell people inside the building to take cover.

According to NBC News, Stewart, 29, had stepped outside the building to use his cell phone when he was shot by Dear, who killed two other people and injured nine in the attack. Stewart, a devoted husband and father of two, rushed into the building in spite of his injuries and shouted for everyone to take cover.

His brother Leyonte Chandler told Today on Monday morning that Stewart's military training must have compelled him to help others in the line of fire.

"I believe that's his military instinct, you know: Leave no soldier behind, leave no civilian behind, just leave no one behind," Chandler said. "So he ran back inside, trying to help out others. I don't know where he was at, as far as how many more breaths he had, but he knew. And before his time ran out I guess that was his main priority...to help and save other lives."

"He tried to run back inside the building -- well, he did -- and tell the other people inside, you know, 'Take cover, get down.' People started taking cover, hiding in bathrooms and whatnot," Chandler recounted.

"People were terrified, people were crying and scared, seeing other people get shot," he continued. "I believe my brother put his life on the line to prevent that. That's definitely heroic."

When police apprehended Dear, he revealed to them that the shooting was motivated by his belief that Planned Parenthood is engaged in the illegal sale of fetal organs, a right-wing myth propagated by the anti-choice movement and anti-abortion extremist groups like the Center for Medical Progress (CMP), which released a series of misleading videos accusing the health provider of running a ruthless, bloodthirsty trade of embryonic human tissue.

Anti-abortion conservatives like presidential hopeful Sen. Ted Cruz have tried to defray blame for the shooting, making false claims that Dear was a "transgendered leftist activist."

However, many are calling on the media and public officials to call Dear what he really is, a right-wing, Christian terrorist.

'No divorcing' the GOP from 'disgusting' racism and fascism after Orban's CPAC display: former party operative

On Friday's edition of MSNBC's "The Beat," Kurt Bardella — a former GOP operative and Breitbart staffer turned Democratic adviser — laid into Republicans at CPAC in Dallas for cheering on speakers openly promoting Christian nationalism and the erosion of democracy.

One of the key moments from that gathering was a speech delivered by Viktor Orbán, the strongman prime minister of Hungary.