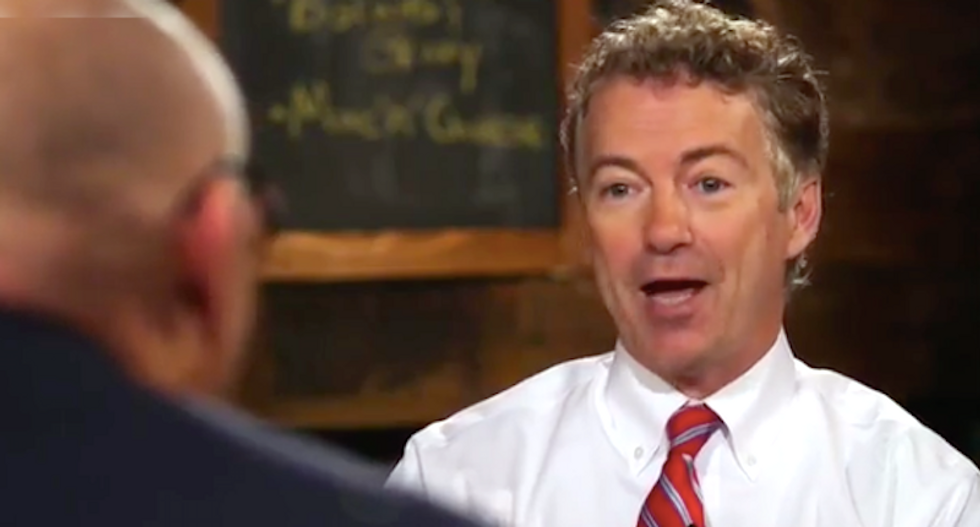 Larry Wilmore sat down for some soul food with a visibly uncomfortable Sen. Rand Paul (R-KY) for a hilariously awkward segment.

The "Nightly Show" host took the Republican presidential candidate to Southern Hospitality BBQ in New York City, and Paul explained what set him apart from his rivals.

"What's extraordinary about what I'm for versus the others is, I think they want power," Paul said. "If Mr. Trump were here, what would he say? 'I'm huge, I'm so smart, I'm so rich I can do anything.'"

Wilmore pointed out that Trump would probably describe Paul as a loser, and the Kentucky senator agreed, but he said the real estate tycoon and reality TV star would probably ask for more power.

"I'm a believer in the people, that you should disperse power," Paul said.

Paul pursed his lips as Wilmore noted that Trump only seemed to grow more popular with voters with every insult he hurled, and the host invited him to try a few "yo mama" jokes in the next GOP presidential debate.

"What do you think, like, your mother wears Army boots?" Paul said. "Would that work?"

Wilmore offered to teach Paul how to play "the dozens."

"For example, finish this: Yo mama so stupid, she thinks pound cake is --"

Paul, an ophthalmologist, again pursed his lips as Wilmore said that Ben Carson, a retired neurosurgeon, seemed to be winning the "battle of the surgeons."

"You know, the brain is kind of important," Paul said. "But what's the brain without eyes?"

Over a mouthful of greens, Wilmore asked Paul whether he thought Carson was a mad scientist. "I don't mean, like, angry -- I mean, like crazy."

Paul declined to comment, and he stifled a laugh as Wilmore did a surprisingly accurate impression of Carson as the cartoon character "Droopy the Dog."

Wilmore asked Paul to state his position on guns, and the candidate said he believed the Bill of Rights guaranteed certain liberties -- and the host suggested the right to own slaves.

"Well, that wasn't actually the Bill of Rights," Paul said.

Wilmore praised Paul for speaking at historically black Howard University, and he said the senator and Carson were the only GOP candidates with "black hair."

"You know, I hadn't thought about it like that," Paul said.

Wilmore took out a notepad and asked which black hair-care products the candidate used.

Wilmore asked if he would ever consider getting a Jheri curl, and Paul joked that he had already been accused of having that hairstyle.

He then praised Paul's policies on criminal justice reform, and he asked the candidate to explain those.

Wilmore then asked Paul to "keep it real" by honestly answering a couple of questions -- and the host asked him to describe his feelings for Trump.

Paul explained that he thought Trump was simply in the "wrong arena" as a politician, and Wilmore handed him some weak tea to signify that he hadn't kept it real.

He then asked Paul if he would consider serving as Trump's running mate.

"It would be an utter and absolute disaster, and I would want no part of it," Paul said -- earning a 100-percent keeping it real score.

Watch the entire segment posted online by Crooks and Liars: