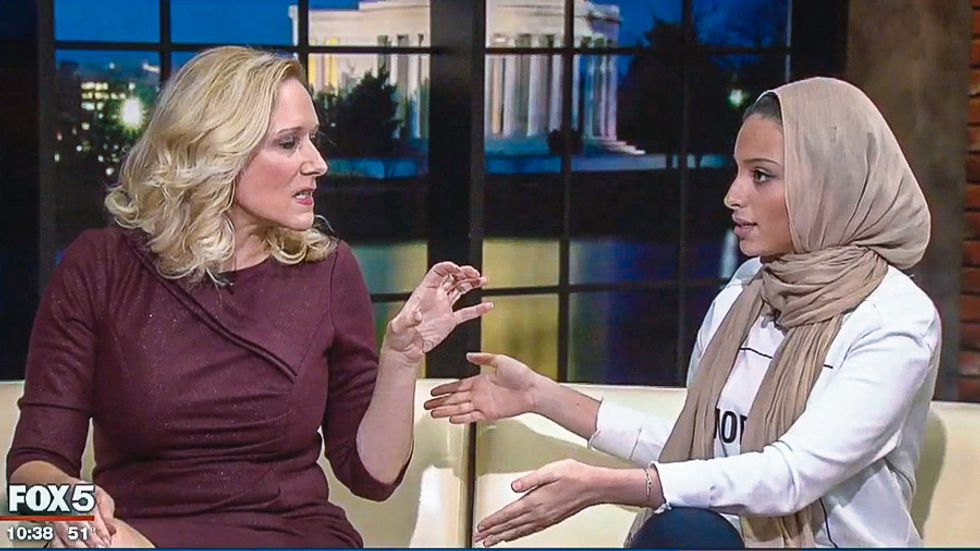 Tagouri began the discussion on WTTG's "Unfiltered" segment by asserting that the federal government had been effective at resettling around 750,000 refugees since 2001, and pointing out that none of them had been charged with domestic terrorism.

Duff, however, insisted that there was no guarantee that one of the Syrian refugees would not "become a Trojan Horse and come into this country."

"There have been 1,500 Syrian refugees let into this country so far, we're talking about another 10,000," Duff said. "The cost alone to the American taxpayer is going to be $6.5 billion. We have a right to defend ourselves."

Tagouri argued that refusing to help Syrian refugees was exactly what ISIS wanted the United States to do.

"It's just funny to me because this entire conversation is sparked from the Paris attacks when none of the attackers were refugees," she noted.

"Not true," Duff interrupted. "There was one that had a Syrian passport."

"Of course it's fake!" Duff insisted, turning to Tagouri. "Because ISIS has invaded all of these government offices now. You do not know that for a fact, they know that they found a passport from a Syrian refugee."

"There are 85,000 refugees now, why haven't they stood up and defended their nation?" Duff asked. "Because I guarantee, if there were 85,000 Americans under attack, we would have took up arms. Why are we now going to spend this type of money when they're not even defending themselves?"

Tagouri said that the United States would be "repeating history" if it made the same mistake as it had with Jews fleeing Nazi persecution during World War II.

Duff shot back that the comparison was "insulting."

"This is a different kind of refugee," she quipped. "I find it insulting that you would compare it to the Jews. Because we're looking at Syria that has, again, at minimum 50,000 ISIS members. Minimum!"

"Now it has festered out of control and we're going to say we've turned away innocent people when you cannot guarantee to me that you will not have ISIS in this country," Duff said. "And the day that the women in this country are raped and beheaded the way that the Yazidi women have been, we will have blood on our hands!"

"This is such a shame that we're talking like this," she added. "For us to sit here and continuously feed into this idea of what ISIS wants to believe, which is what you're doing."

"Don't speak for me," Duff complained.

"Well, it's what you're doing," Tagouri remarked. "They are literally sitting laughing at us because we're having this discussion."

"If the Syrians want to defend their nation then how come they have not defended it?" Duff exclaimed, smacking her hands together.

"I think it's extremely unfortunate that we're having this talk," Tagouri concluded. "And I think it's entitled and arrogant because this isn't how America's foundation was built."