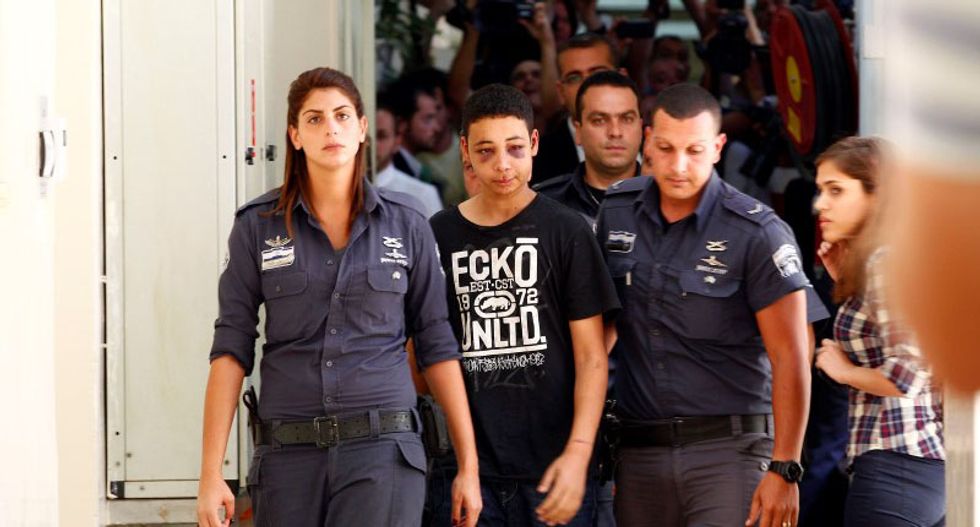 Tariq Khdeir (C), a 15-year-old American of Palestinian descent and a cousin of Mohammed Abu-Khdeir, the youth whom Palestinians believe was abducted and murdered by far-right Israelis on Wednesday, is escorted by Israeli prison guards during an appearance at Jerusalem magistrate's court July 6, 2014. REUTERS/Ronen Zvulun

An Israeli policeman was spared jail and sentenced to community service on Wednesday for beating an American teenager of Palestinian descent during disturbances in Jerusalem last year, an incident that had prompted U.S. concern.

Tariq Khdeir was visiting from Tampa, Florida, as protests erupted over the abduction and killing on July 2, 2014, of his 16-year-old cousin, Mohammed Abu Khudeir, allegedly by three Israeli Jews.

Amateur video showed two Israeli riot policemen setting upon Tariq Khdeir, who was 15 at the time. One held him down while the other punched and kicked him. He was left with a heavy black eye and swollen lip.

Police said Khdeir was among six protesters caught taking part in clashes, while he said he was only a bystander.

Israel pressed charges against one of the policemen, who was convicted of assault and battery in Jerusalem Magistrates' Court.

The court on Wednesday sentenced the policeman, whose name was not released, to 45 days' community service and a suspended term of four months in prison, a spokeswoman for the Justice Ministry's police internal affairs department told Reuters.

"We requested that he be jailed for seven months," she said, adding that she was unable to elaborate on the sentencing. A court spokesman declined comment, saying the case was sealed.

At the time of Khdeir's beating, the U.S. State Department said it was "profoundly troubled" by reports on the incident and strongly condemned any excessive use of force.

"We are in regular communication with the government of Israel regarding its obligation to provide protection and security for U.S. citizens," said the official, who declined to be named.

"This case has now been reviewed through the Israeli judicial system and the Israeli court has issued a ruling. We would refer you to the government of Israel for further information."

Israel has charged the three Jews with the murder of Khdeir's cousin, saying they were seeking to avenge the abduction and killing in June 2014 of three Israeli youths by Hamas militants.

The incidents sparked a cascade of violence culminating in war between Israel and Hamas in the Gaza Strip in July-August last year.