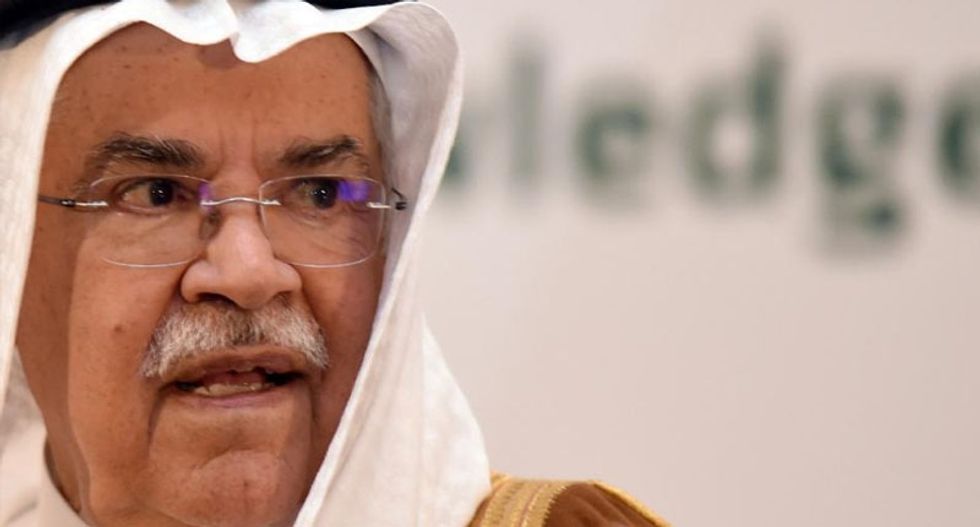 Saudi Oil Minister did not refer specifically to the conference, but said he believed improving the technology for reducing emissions from fossil fuel plants was as important as boosting the use of renewable sources of energy (AFP Photo/Fayez Nureldine)

Naimi was speaking at a meeting of major fossil fuel producer and consumer nations in Riyadh ahead of a UN conference on climate change in Paris later this month.

Saudi Arabia is seen as an opponent of a proposed treaty to be discussed at the conference that would demand legally binding commitments from signatory countries on cutting greenhouse gas emissions.

Naimi did not refer specifically to the conference, but said he believed improving the technology for reducing emissions from fossil fuel plants was as important as boosting the use of renewable sources of energy in meeting emissions targets.

"I believe all the nations represented (at this meeting), and many beyond, share a belief that carbon capture and storage is a critical part of the global quest to reduce greenhouse gas emissions," he said.

"We believe all forms of energy will be required to help meet the needs of future generations," said Naimi, whose country sits on 16 percent of world oil reserves.

"Renewable forms of energy, such as nuclear, solar and wind are increasingly utilised, and they complement fossil fuels."

The November 30-December 11 UN summit in Paris aims to unite all the world's nations in a single agreement on tackling climate change, with the goal of capping warming at two degrees Celsius (3.6 degrees Fahrenheit) over pre-Industrial Revolution levels.

Naimi said Saudi Arabia is not in "dire need" to cut domestic energy subsidies, which the International Monetary Fund had recommended among other adjustments to reduce a deficit triggered by plummeting oil prices.

"You only go back and take assistance away (from people) if you are in dire need, and, fortunately, Saudi Arabia is not today in such a dire need," he told reporters.

Naimi also questioned the use of the term subsidies, saying that the price of domestic fuel in the kingdom is still higher than the cost the government pays for production.

The IMF said in September that energy price subsidies accounted for 8.0 percent of the Saudi gross domestic product in 2014, or around $60 billion.

The kingdom -- the largest Arab economy and the world's biggest oil exporter -- is facing an unprecedented budget crunch after crude prices dropped by more than half in a year to below $50 a barrel.