Peace symbol-wearing Muslim girl to Trump: I heard you wanted us to wear badges so I chose one for myself 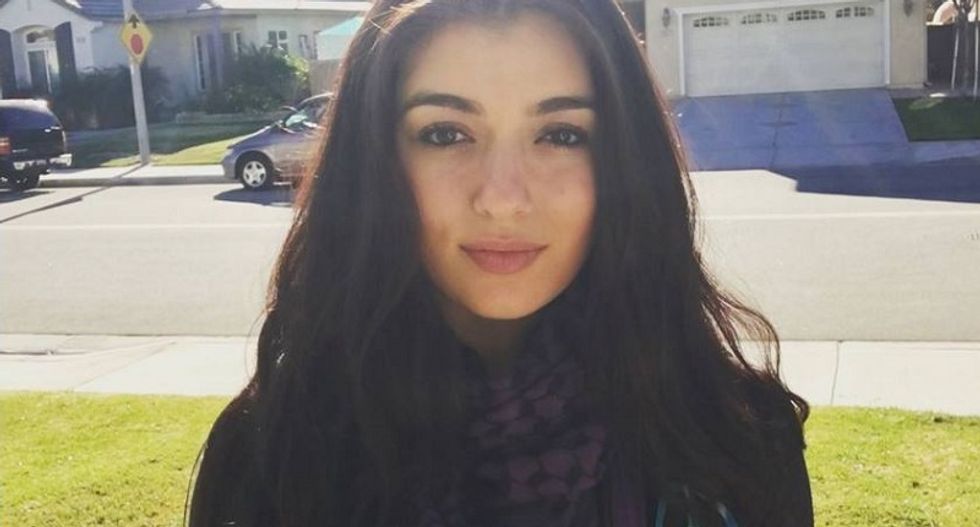 A young Muslim woman is being commended for writing an open letter to GOP presidential candidate Donald Trump blasting him for saying Muslim Americans should be tracked by the government and have special identification.

Marwa Balkar, 22, of the Southern California city Corona, posted the letter last week, and since then it has garnered more than half a million "likes" on Facebook, including from Facebook founder Mark Zuckerberg. Balkar posted a picture of herself wearing a peace symbol on her shirt.

"We are still Americans, and I feel like if he's running to be the leader of our nation, he shouldn't be alienating us," she told ABC7.

Balkar said Trump has yet to respond.

"I heard you wanted us to start wearing ID badges, so I decided to choose one for myself. I am not easily identifiable as a #Muslim just by looking at me, so my new badge will let me display proudly who I am. I chose the peace sign because it represents my #Islam," she wrote. "I heard you want to track us as well. Great! You can come with me on my Cancer Awareness walks at the local middle school, or you can follow me to work where it's my job to create happiness. You can also see how my local mosque makes PB&J sandwiches for the homeless and hosts interfaith dinners where everyone is welcome."

"Marwa you have more love and compassion and integrity in your heart than Donald Trump has and we can only pray that one day his eyes and ears will be opened to the truth," one woman wrote. "Good on you for being a remarkable human being Bless you heaps."

Balkar told ABC she's gotten messages of support from all over the world.

Watch the report, from ABC7, here: