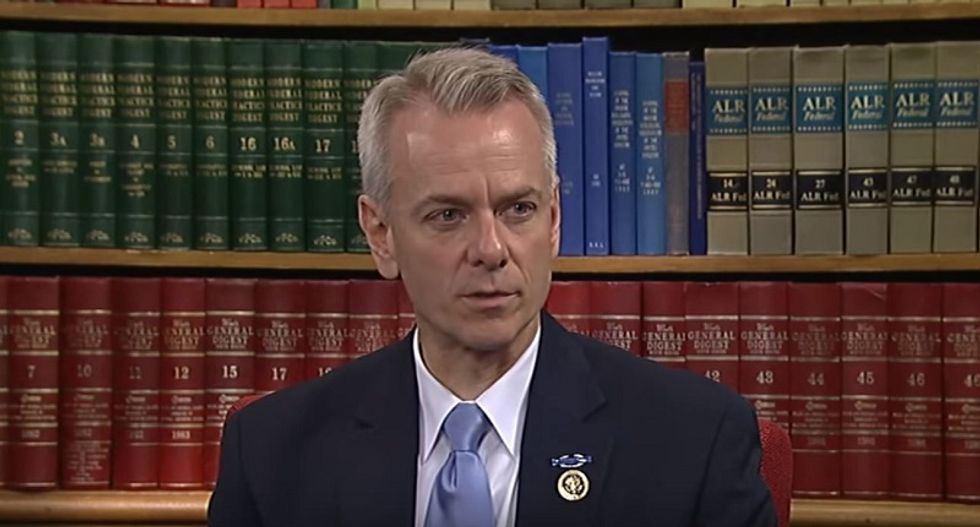 Republican Rep. Steve Russell of Oklahoma laid into his party for its stance on Syrian refugees, saying that turning away people seeking solace from violent terrorist groups hands victory to Islamic State jihadists.

Russell, a combat veteran of Operation Iraqi Freedom and 21-year career soldier with the Army, spoke Wednesday to Congress and decried anti-refugee rhetoric and moves by mostly-conservative state governors to bar fleeing migrants from settling in their states.

"While I have tried to focus my comments on actions that we should take to eliminate ISIS, one action we should not take is to become like them. America is a lamp that lights the horizon of civilized and free mankind," he said on the House floor.

"The Statue of Liberty cannot have a stiff arm. Her arm must continue to keep the torch burning brightly," Russell continued. "If we use our passions, anger, and fear to snuff out her flame by xenophobic and knee-jerk policy, the enemy wins. We have played into their hands, period."

Russell also pointed out there is a multi-layer system in place for vetting refugees, and also noted that only 1,900 Syrian refugees have come to the United States in the last four years, most of whom are women and children. He then illustrated the similarity between many conservatives' current stance on refugees and the views held during World War II about people fleeing the Nazis in Europe.

Fighting immigration is 'the best vote-getting argument . . . The politician can beat his breast and proclaim his loyalty to America.'

'He can tell the unemployed man that he is out of work because some alien has a job.'

Here is another one:

Congress must 'protect the youth of America from this foreign invasion.'

And how about this one?

There are many more, but these quotes were from 1939. The refugee bill was not for Muslim and Christian Syrians or Iraqi Muslims, Christians and Yazidis; it was for German Jews. While it was true that Germany was, indeed, a threat, the refugees were not. They were 20,000 children.

Not only did that bill of 1939 not pass, but that Congress, with the same speech and rhetoric that I have been hearing in recent days in this august Chamber, Mr. Speaker, passed hurdle after hurdle in 1939 to make it more difficult for refugees to enter. They were, unfortunately, successful.

He then talked about the need to defend American principles.

We must not become them. They win if we give up who we are, and even more so, without a fight.

We guard our way of life by vigilance. We must be watchful. We have to have each others' back and be alert to dangers around us. We must speak up when we see something unusual. By maintaining who we are amidst the threat, amidst the hatred, amidst the trials, we win.

Patrick Henry did not say, ``Give me safety or give me death,'' but, rather, ``Give me liberty,'' implying that he was willing to lose his life to defend that liberty.

We have defended our way of life, Mr. Speaker, for 240 years. Now we as Americans must defend it again.

We must defend it when the critic sitting on the couch in his underwear eating his bag of cheese puffs is pecking out hatred and vitriol on some social media.

We must defend it and have courage when voters are caught up with sincere passion, demanding security that also might kill our liberty.

We must defend it with our warriors who have worked hard to keep the fight off our shores by being vigilant and aware at home and while looking after their families who don't have them to protect them.

We will always have threats, but liberty, when lost, takes generations, if ever, to regain.