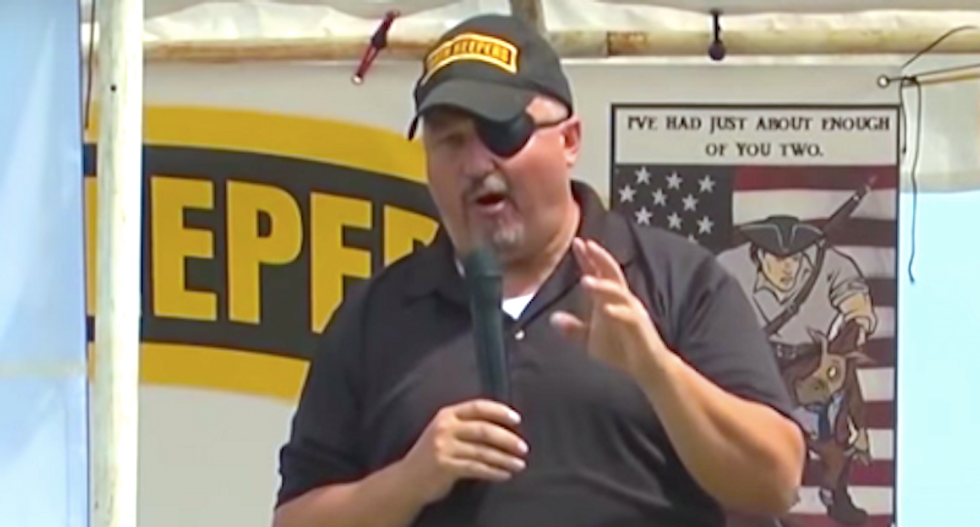 The Oath Keepers are tired of being marginalized as "militia members" -- so the pro-gun militia group is planning to carry their anti-government message into local government institutions to conscript unsuspecting neighbors into their yearned-for revolution.

The group's founder, Stewart Rhodes, outlined the plan Aug. 29 at the group's "Appalachian summit" in Gilbert, West Virginia, but the speech was recently posted online by the Institute for Research and Education on Human Rights.

The three-day event attracted members of the Oath Keepers and Three Percent militia groups, as well as Tea Party and other conservative or right-wing activists.

He said these volunteers are "perceived as a good guy" by their neighbors, who might not be receptive to invitations to join a militia, and go "shopping for talent" to identify potential members of neighborhood watch groups that are armed vigilante groups.

"(Militia) has been turned into the M-word," Rhodes complained. "It’s a dirty word now -- just like the N-word."

He suggested throwing a block party to identify neighbors' skill sets to prepare for revolution or some other impending emergency.

"For example, if I have a retired doctor on my block, even if he's not switched-on or willing to participate right now, I know where he lives (and) I'm going to make sure that when the crap hits the fan -- he is going to be protected," Rhodes said.

The Oath Keeper founder, who is facing disbarment in Montana for violating his attorney oath, mapped out his vision of community life during the speech.

He said most churches are not taking seriously their responsibility to serve as emergency refuges and to meet the community's charity needs, and he urged militia members to help them with "prepping."

"It used to be that churches is where you went to for welfare, for assistance in need," Rhodes said, reminding group members to encourage their pastors to spend church donations on fresh water and other emergency provisions.

He also encouraged group members to recruit the leaders of local veterans' groups or other community organizations -- so they can mobilize their existing members during a revolution.

And make no mistake -- revolution is exactly what Rhodes and his pro-gun militia group is preparing to fight.

“The whole point of the Oath Keepers is to stop a dictatorship from ever happening here,” Rhodes has said, raising the specter of martial law and mass detentions at FEMA camps.

“My focus is on the guys with the guns, because they can’t do it without them," he explained. "We say if the American people decide it’s time for a revolution, we’ll fight with you.”

The strategy suggests an organizational shift away from recruiting current and former law enforcement and military personnel, as the group tries to broaden its mainstream appeal by inserting itself into high-profile stories such as the Ferguson protests and the ongoing legal saga of Kim Davis.

It seems to be paying off. The mayor of Chino Valley, Arizona, was so impressed by a militia member's presentation last month during a city council meeting that he asked the group to stand at the ready during bad weather and other potential emergencies.

"I don't want to get into fear mongering, and trying to scare people, because too much of that already goes on, but it is a good idea to prepare for the worst," said Mayor Chris Marley, of Chino Valley.

The Oath Keepers, who vow not to obey or enforce laws they believe are unconstitutional, even got an ordinance passed in Oregon this week that requires the county sheriff to act like one of them -- even if he or she is not.