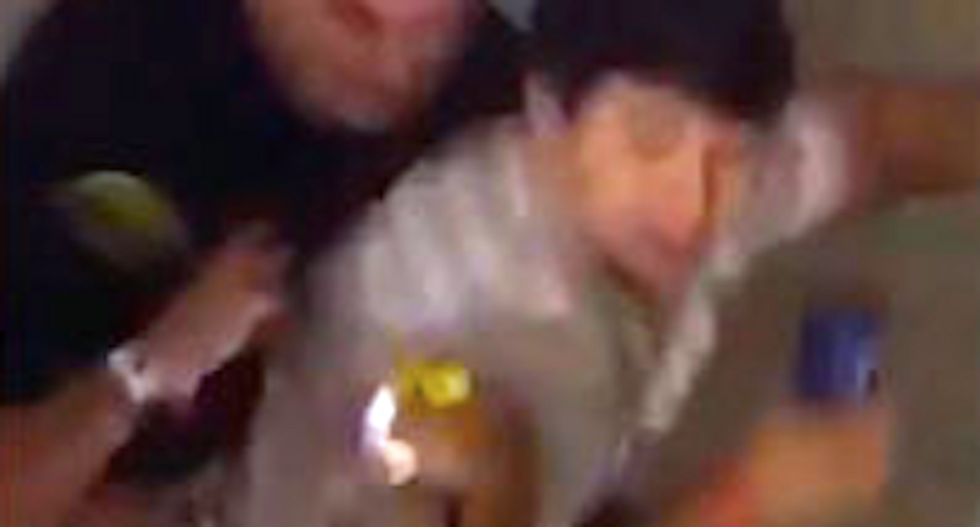 Police officers barged into an off-campus apartment near the University of Alabama and used a nightstick and Taser to violently arrest students over a noise violation.

Tuscaloosa police were called about 3 a.m. Saturday to the apartment after a neighbor complained about loud music, and video recordings show students refusing to let officers enter the apartment, reported AL.com.

The students also refused to leave, and an officer grabs one of them and yanks him outside before barging into the residence.

The students, all of most of whom appear to be white, asked the officers whether they had a right to enter and search the apartment, and they asked whether they were being arrested or detained.

"I respect your authority, but you are not allowed in my apartment," one student tells an officer, who complains that he is not respecting his authority. "I am answering your questions in a timely manner."

The officer tries to grab the student, who steps back out of the doorway, and the officer steps through the door and takes out his Taser.

"I don't have to have a warrant," the officer shouts, and several students inside remind him that he does. "You're under arrest for harassment for grabbing my arm, so get outside now!"

The student and his friends insist he never touched the officer's arm, and he tries to pull the student outside by his shirt.

Another student steps forward, reminds the officer the incident has been recorded on video, and calmly but firmly tells the officer that they are closing the apartment door.

A woman inside the apartment asks if her friend is being arrested or detained, and the officer says he is under arrest.

Several students are shown recording video inside the apartment, and at least one other records officers bursting into the residence from outside.

Officers drag out the student who lives at the apartment and throw him to the ground, and an officer climbs on top of him and shocks the man with a Taser as he holds his hands up to protect his face.

Other officers join in, and one of them beats the student with a nightstick as a woman screams.

Police tell the students to calm down, and a man calmly replies that they are being calm.

"Shut your f*cking mouth," one officer says, bursting back into the apartment. "Shut the f*ck up."

A woman calmly tells the officers they are recording video of the confrontation, and he replies: "I don't give a shit."

The videos have been forwarded to internal affairs for investigation.

Two men and a woman -- all of them students -- were taken into police custody during the incident.

Watch video of the incident posted online by AL.com: