Stephen Colbert: Unlike Jeb Bush, I would not go back in time and kill Baby Hitler -- at least, not at first 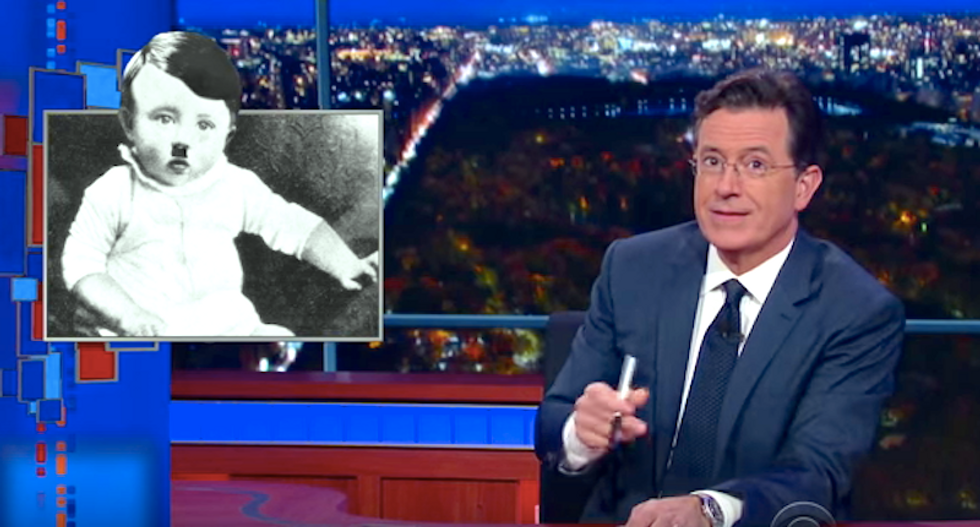 Stephen Colbert thinks he's got a better plan than going back in time and killing Baby Hitler, as Jeb Bush enthusiastically said he would do.

The floundering Republican presidential candidate said, "Hell, yeah," earlier this week when an Internet user asked if he would use time travel, if it were possible, to attempt to avert the Holocaust by murdering the future Nazi dictator.

Colbert said the question was actually a good one, because time travel may one day become possible -- and the "Late Show" host said the United States needed a president who would responsibly and effectively use the science fiction technology.

"When time travel technology arrives, you know the president will be the first one to use it," he said. "You want a trustworthy leader at the helm of Time Force One, someone who will use it responsibly and not waste it taking Jesus on a pterodactyl ride."

"Ben Carson has said, if he could go back in time, he would prevent the Holocaust by giving Jews guns," he said. "Of course, Ben Carson wouldn't kill Hitler himself. As a doctor, he swore first: Do no harm. Second: Give everyone guns."

Colbert is not running for president, but he still outlined his proposal for going back in time and trying to prevent Hitler from killing 6 million Jews in Nazi death camps.

"I, too, would travel back in time of Baby Hitler -- but this is where me and Jeb's time streams start to diverge," he said. "I wouldn't kill young Adolf, I would take him from his parents and raise him with love. Hear me out, hear me out, okay? I would give Hitler a safe, supportive home -- (but) all the while, I would watch him like a hawk."

"I wouldn't let him join anything where they have to wear a uniform -- no Cub Scouts, no Little League, definitely no marching band," Colbert continued. "Most importantly, I would teach Baby Hitler that we do not solve our problems with violence, and then -- if he starts getting mouthy as a teenager, I stick a knife in his ribs and snap off the handle."

"If that attack fails, and the horror of being stabbed by a person that he thinks is his father turns him into a monstrous dictator, it's easily fixable," Colbert said. "I just go back in time and kill Baby Me."