Tea Party senator questions Senate's existence: 'What would be lost if we had only a House of Representatives?' 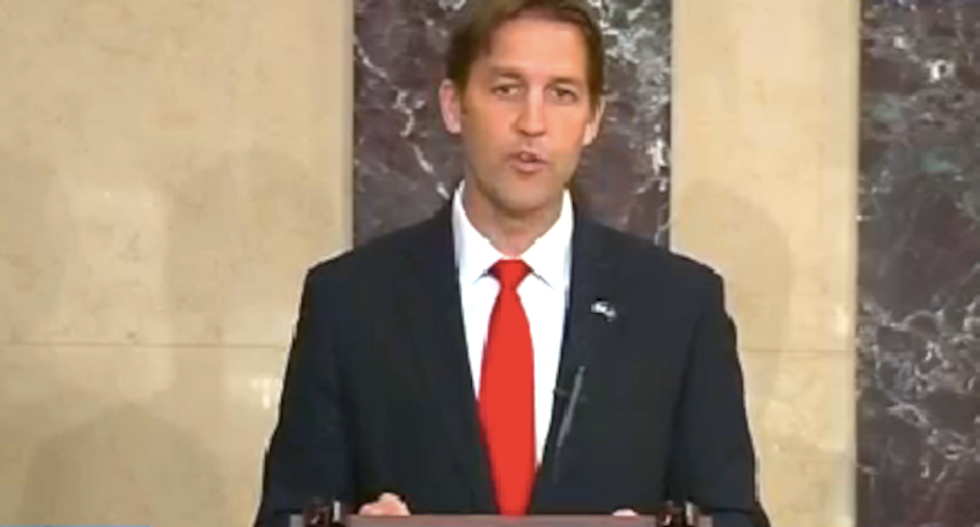 Sen. Ben Sasse (R-NE) said he's been quietly watching his colleagues work during his first year as a senator, and nearly one year after his election -- he wonders whether the U.S. Senate should even exist.

The Tea Party lawmaker said, during his first speech on the Senate floor, that he spends most of his weekends back home in Nebraska, where he has discovered "the people despise us all."

"Why is this?" Sasse said Tuesday, 364 days after his election. "Because we’re not doing the job we were sent here to do. The Senate isn’t tackling the great national problems that worry those we work for."

He slammed his fellow Republican "grandstanders" for using their elected office to promote outside business interests, and he attacked Democrats for doing "this body harm through nuclear tactics."

"I therefore propose a thought experiment: If the Senate isn’t going to be the most important venue for addressing our biggest national problems, where is that venue?" Sasse wondered aloud. "Where should the people look for the long-term national prioritization? Or, to ask it of ourselves, would anything be lost if the Senate didn’t exist?"

"Again, this a thought experiment, so let me be emphatically clear: I think a great deal would be lost if the federal government didn’t have a Senate, but game out with me the question of, ‘Why?’" the senator continued. "What precisely would be lost if we had only a House of Representatives, rather than both bodies?"

He continued his "thought experiment" by suggesting that Woodrow Wilson, regarded by some as the "godfather of liberalism," had set in motion a plot to eliminate the legislature a century ago during his presidency.

"The growth of the administrative state, the fourth branch of government, is increasingly hollowing out the Article I branch, the legislature, and many in Congress have been complicit in this hollowing out of our own powers," Sasse said. "So would anything really be lost if we doubled-down on Woodrow Wilson’s impulses and inclinations toward administrative efficiency by removing much of the clunky-ness of legislative process?"

It's not the first radical proposal put forward by Sasse, who gained attention during last year's campaign by suggesting that the U.S. Capitol be moved from Washington, D.C., to his home state of Nebraska -- "where (lawmakers) can experience family, conservative values, living within a budget, and pulling together, not pulling apart.”

He has also suggested that conservatives must "take on" the U.S. Supreme Court over same-sex marriage, school prayer and religious instruction in public schools.

"This is why we respect this guy ... his guts and gumption in expressing what many Americans recognize as a foundational problem resulting in an insolvent, less sovereign nation -- and his commitment to taking action," Palin said on her Facebook page. "I appreciate him taking responsibility '...to blow the whistle on these problems so Americans are aware of them.'"