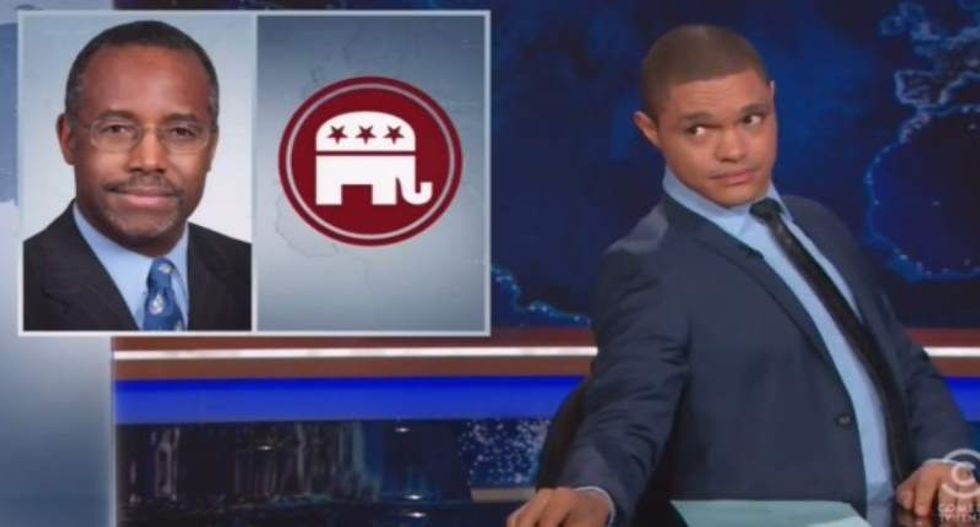 Carson had tried to claim that Duane Clarridge was not his advisor after Clarridge told the New York Times that the candidate was unable to retain "one iota of intelligent information about the Middle East" despite weekly policy briefings.

"He is a person who has come in on a couple of our sessions to offer his opinions about what was going on," the former neurosurgeon said in a Nov. 17 interview.

"So, an advisor?" a skeptical Noah said, before impersonating Carson trying the same rhetorical trick: "'I don't think of myself as a surgeon; I'm just a guy people pay to stab their brain until they're healthy.'"

Carson's campaign didn't just disavow Clarridge, Noah explained, but did so in a "d*ckish" way by describing him as "an elderly gentleman" who was victimized by the Times after being quoted as saying that Carson's advisors couldn't "make him smart."

Besides relying on Clarridge's account, Noah showed footage of Carson completely freezing when Fox News host Chris Wallace asked him on multiple occasions, "Who would you call first" if he ever needed to assemble a coalition of allies as president.

"It's 'Ghostbusters,' come on!" Noah yelled. "Everybody knows the right answer to that question. You could go to any African country and ask a little kid, 'Who you gonna call?' He'd be like, 'Ghostbusters -- and UNICEF, I'm hungry."

He then played a clip of MSNBC's Chris Matthews doubling over in laughter after reporting that Carson wondered whether a Palestinian territory needed to be in Israel, or whether they could "slip it into Egypt."

"'Can't you just slip it into Egypt?'" Noah asked. "You think the Egyptians won't just notice him walking in with Palestine?"

Watch Noah's commentary, as posted online on Wednesday, below.