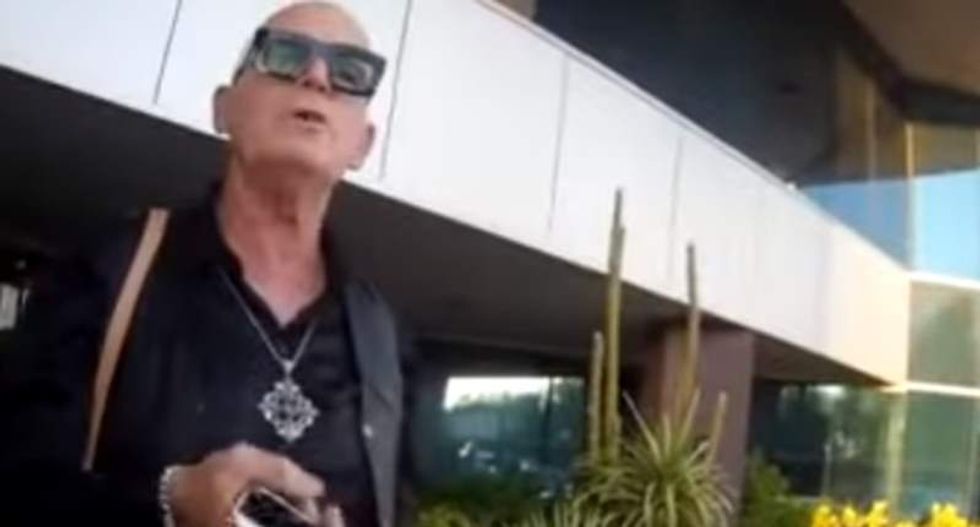 The father of pop singer Katy Perry, Keith Hudson, was the target of a bizarre rant by a conservative Christian activist blaming him for her son's actions, the Frisky reported.

"You think you're acting like a Christian right now?" Hudson tells Christine Weick in video of the encounter on Monday.

"Yes I am, because I am rebuking you right now," Weick replies. "Because my kid watches your kid's videos and they're sending him to hell because of the choice he made, because of your daughter and your lack of discernment and direction."

Weick originally posted the video on her Facebook page, boasting that she "let out my righteous anger" by ambushing Hudson at a Christian radio station in Phoenix. Though she later deleted the post, the footage was still posted online by another person.

"Minister to your daughter, because that is needed more than ever," she tells Hudson. "You ought to know better. When you have a girl who walks with Satan the way she does --"

"I do, and I have no relationship with my son because he is walking away from the Lord and he exploits it," she says.

Before finding success on the pop charts, Perry began her career singing Christian-oriented music. But Veick ends the recording by hissing at Hudson that Perry is "wicked."

Veick gained attention last year for a video in which she claims that energy drinks are part of a satanic plot to corrupt Christians. She also protested against same-sex marriages in front of the Supreme Court earlier this year, arguing that God had sent her on a mission to save "the homosexuals."