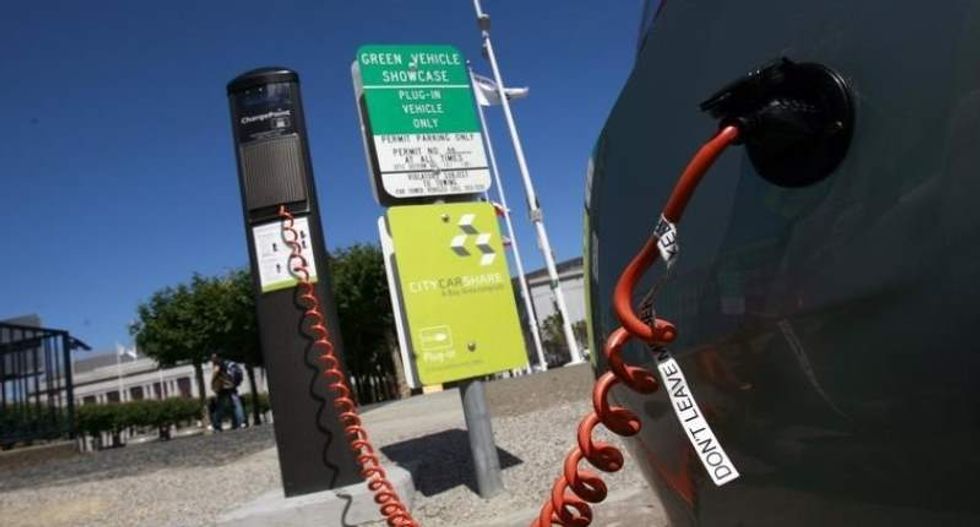 A hybrid Toyota Prius is electrically charged at a municipal charging station near City Hall in San Francisco, California on Aug. 6, 2009. Photo by Robert Galbraith for Reuters.

U.S. regulators are delaying rules that would require electric and hybrid cars to alert sight-impaired pedestrians and bicyclists until at least mid-March, according to a recent government filing.

The decision is the latest setback for a government plan that has been in the works since 2013 to require “quiet cars” - vehicles that operate at low speeds without an internal combustion engine running - to add new audio alerts at low speeds.

The National Highway Traffic Safety Administration estimates the odds of a hybrid vehicle being involved in a pedestrian crash are 19 percent higher compared with a traditional gas-powered vehicle.

The auto safety regulator has said that if the proposal were implemented, there would be 2,800 fewer pedestrian and bicyclist injuries annually. About 125,000 pedestrians and bicyclists are injured each year.

The rules would apply to hybrid and electric cars, SUVs, trucks, buses and motorcycles, and are aimed at preventing crashes at intersections or when electric vehicles are backing up. Advocates for the blind have pushed for the rules.

Automakers have raised concerns about the alerts, saying they are too loud and too complicated. They also want them required only at lower speeds.

Under a 2010 law passed by Congress, the NHTSA was supposed to finalize the regulations by January 2014. Automakers will get a minimum of 18 months from the time the rules are finalized before they must begin adding the alerts.

NHTSA Administrator Mark Rosekind said in July the regulation would be finalized by November - a timetable the agency says in a new government document it will not be able to meet.

The Transportation Department, in explaining the latest delay, said in a document posted on its website that "additional coordination is necessary." NHTSA declined to elaborate on Tuesday.

NHTSA in 2013 said it expected the rules would cost the auto industry about $23 million in the first year, because automakers will need to add an external waterproof speaker to comply.

(Reporting by David Shepardson in Washington; Editing by Dan Grebler)