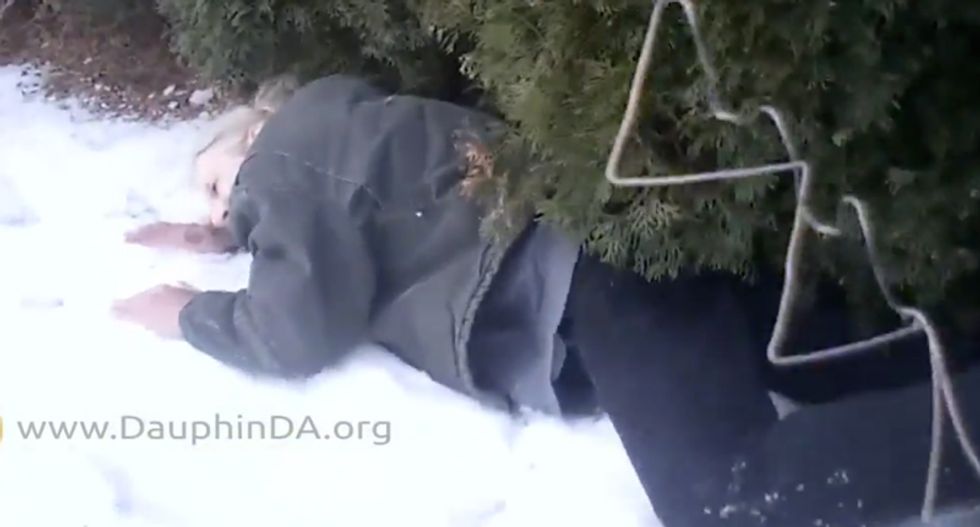 Another cop has been cleared of charges for cold-blooded murder.

Officer Lisa Mearkle of the Hummelstown Borough Police Department was found not guilty of criminal homicide for the shooting death of 59-year-old David Kassick on February 2. Video has just been released from the Taser camera which was deployed before she fired two bullets into the man’s back, as he lay face down on the ground in full compliance with her orders.

The video of this cold-blooded killing by a maniacal cop, shown in full detail, somehow did not convince a jury that it was homicide. He had been chased down, shocked repeatedly with a Taser, fallen down face first in the snow, displayed his hands clearly at the officer’s orders, and then shot in the back twice.

Officer Mearkle had attempted to pull Kassick over for an expired inspection sticker, but Kassick fled to his family home, where he tried to run into the backyard. That’s where Mearkle ended his life.

Mearkle seems to be in a hysterical rage as she shoots the Taser into Kassick’s back. He falls to the ground, shouting and writhing in pain as police sirens blare. She applies the Taser continuously for almost 30 seconds as he was on the ground, while shouting for him to “get on the ground.”

He is, in fact, on the ground. She shouts, “Show me your hands!”

Kassick, face down in the snow after receiving 50,000 volts of electricity, holds his hands forward and says, “I am showing you.”

She continues shouting “Show me your hands!” as he is showing his hands, and then fires the Taser and two bullets into Kassick’s back.

Kassick shouts at the officer in disbelief during his last moments of life. Officer Mearkle continues behaving as if this dying man was some sort of a threat.

In the charge of criminal homicide, the arrest affidavit stated:

“At the time Officer Mearkle fires both rounds from her pistol, the video clearly depicts Kassick lying on the snow covered lawn with his face toward the ground, furthermore, at the time the rounds are fired nothing can be seen in either of Kassick’s hands, nor does he point or direct anything toward Officer Mearkle.”

District Attorney Ed Marsico, in bringing the criminal charges against Mearkle, said that it appeared from the recording that Kassick was simply trying to remove the stun gun probes from his back before his life was taken.

This is one of the most egregious displays of Blue Privilege we have witnessed, made all the more depressing because a “jury of peers” gave the verdict of not guilty.

D.A. Ed Marsico should be applauded for attempting to bring a murderer in uniform to justice.