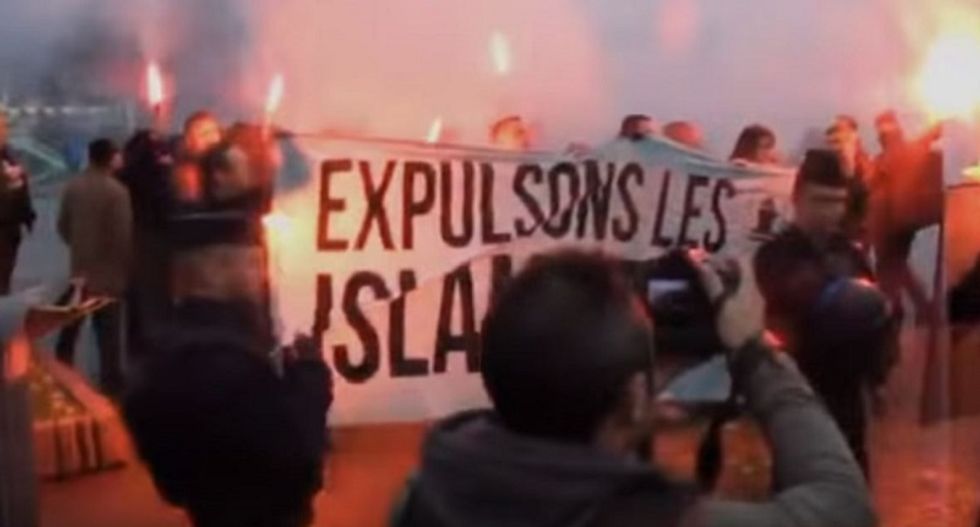 Anti-Muslim bigots chased away by mourners in Lille (Screenshot/YouTube)

French mourners in the city of Lille, which is north of Paris, sent anti-immigrant bigots scurrying away after they tried to intrude on a vigil for victims of Friday night's terrorist attacks, the Independent reports.

The vigil began at 3 p.m. local time but was quickly interrupted by about 15 members of far-right group, the French National Front. The group angered grief-stricken vigil attendees by shouting, "Expel Islamists," throwing firecrackers and unfurling an Islamophobic banner.

But the bigots were quickly forced to leave when the crowd of hundreds turned on them and forced them to retreat. Security forces intervened before tensions escalated further, according to the British publication.

The terrorist organization Islamic State has taken credit for the attacks that killed 129 and injured hundreds after night life attractions were targeted by gunmen and suicide bombers.

After forcing the FNF to leave, the crowd reportedly broke into the French national anthem, La Marseilleise.