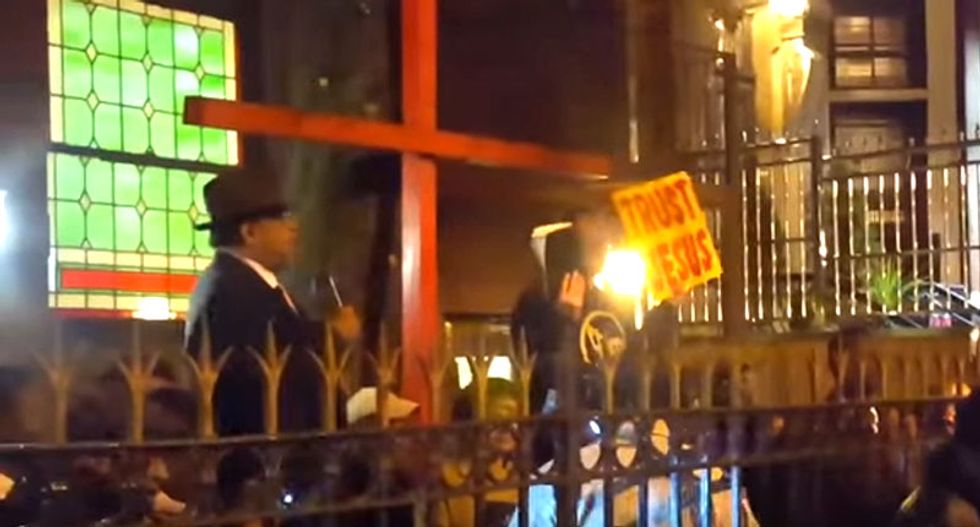 Pastor James David Manning and his supporters outside the church (Screenshot)

A notorious New York pastor addressed "Love not Hate" protesters outside his church by shouting racist and anti-gay slurs.

The "Love not Hate" rally outside of Pastor James David Manning's Atlah Worldwide Church on Monday was organized by the group Harlem Against Violence, Homophobia, and Transphobia to protest the church for demonizing LGBT people. The demonstration drew more than 100 people, according to DNAinfo, including New York state Assemblyman Keith Wright.

"Where are all the n*gger f*ggots?" Manning yells. "Where are the n*ggers? Why are ya'll white?"

The pastor eventually spots a black protester, and begins yelling about a "n*gger lesbo."

"Hey, you lesbo, come over here," he shouts repeatedly.

Pastor Manning -- who has admitted to having been tempted by the gay "lifestyle" -- gained international notoriety after claiming in a video that Starbucks baristas were secretly adding semen to customers' lattes as part of a gay plot. His church in Harlem frequently displays signs with anti-gay messages, including calling for the stoning of LGBT people.

"The messages displayed by the ATLAH Church are not reflective of this community, but are grossly offensive hate speech that have no place in the streets of Harlem," Assemblyman Wright said in a statement. "Today, humankind finds itself surrounded by the tragedies of war. In upper Manhattan and abroad, we are crippled by problems of inequality. Record-high debt is ensconcing countries, communities, families and individuals. There is no time or attention left to spend spreading a message of bigotry. Today, the truest members of the Harlem community ‎are speaking up and we reject this display of hatred by ATLAH Church."