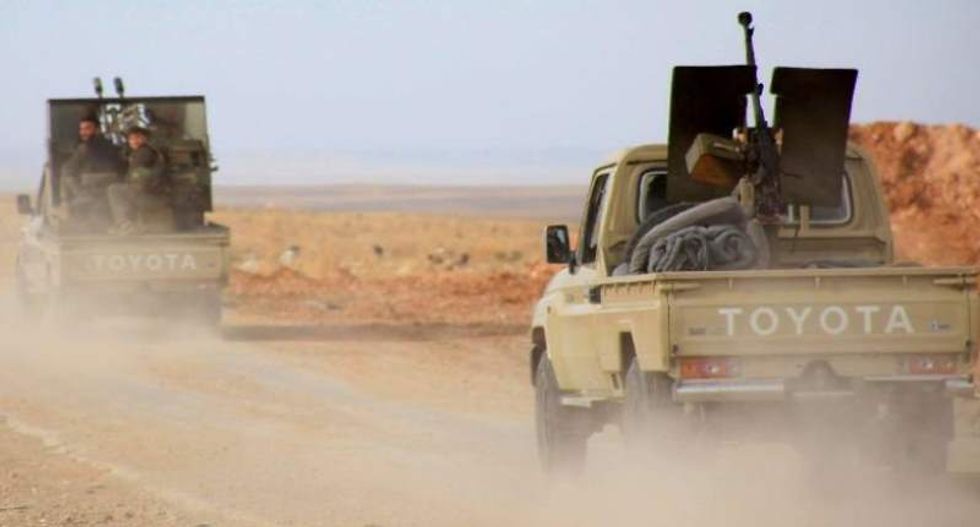 Mustard gas was used during summer fighting in Syria but it was not clear by whom, the global chemical weapons watchdog said Thursday, while jihadists seized a key town from regime forces.

The deadly gas was used in the flashpoint town of Marea in the northern province of Aleppo on August 21, a source from the Organisation for the Prohibition of Chemical Weapons (OPCW) told AFP.

"We have determined the facts, but we have not determined who was responsible," the source said.

Allegations that jihadist militants have been using chemical arms have been increasing in recent months in both Iraq and Syria.

Syrian rebels and aid groups said that, at the end of August, dozens of people were affected by a chemical attack on Marea, where moderate opposition rebels and militants from the Islamic State (IS) group were battling.

Doctors Without Borders (MSF) said it had treated four civilians from one family. Patients at an MSF hospital in Aleppo said a mortar round hit their house and "after the explosion a yellow gas filled the living room".

Meanwhile, bolstered by a Russian air campaign launched in September, President Bashar al-Assad's forces have been fighting to retake territory lost to rebels in the country's brutal four-year war but have failed to score significant gains.

On Thursday a jihadist faction, Jund al-Aqsa, was reported to have seized the last government-held town on the main highway between Syria's second city Aleppo to the north and the city of Hama to the south.

They "seized full control of the town of Morek after a fierce offensive", said the Syrian Observatory for Human Rights, a Britain-based monitoring group.

The setback for Damascus came as France announced it would deploy an aircraft carrier to boost its forces in the fight against the Islamic State group, which has seized control of large parts of Iraq and Syria.

Jund al-Aqsa boasted of victory in Morek on its Twitter account but a Syrian security source insisted fighting was ongoing and denied a major setback.

Opposition fighters in the area "are being dealt with by the Syrian and Russian air force," the source said.

Morek has changed hands several times in the conflict, with government troops last retaking it in October 2014.

It was one of a number of counter-offensives the Damascus regime has launched since Moscow intervened.

Regime forces scored a rare win Wednesday, recapturing from IS an alternative route further east that provides the government's sole link to neighbourhoods of Aleppo under its control.

Advancing IS forces had severed the road last month, cutting off food and supplies to tens of thousands of civilians in the west of Aleppo city.

For the first time since IS had cut the road, trucks of fruits and vegetables arrived in regime neighbourhoods of the city, residents said.

IS has continued advancing its various parts of Syria, despite the Russian strikes and more than a year of air raids targeting the group by a US-led coalition.

On Thursday the Observatory said that at least 22 civilians were killed along with several IS fighters in air raids on the Syrian town of Bukamal, near the Iraqi border, but did not say which nation carried out the strikes.

Russia said its air force carried out strikes near the IS-held ancient city of Palmyra, bringing to 263 the number of targets Russian jets have hit in the past two days.

And France, which joined coalition operations in Syria last month after previously carrying out strikes in Iraq, said on Thursday it would deploy its Charles de Gaulle aircraft carrier to better fight the jihadists.

More than 250,000 people have been killed in the war, which began in 2011 and has frequently spilled across the border.

On Thursday, six people were killed in a suicide attack at a meeting of Muslim clerics in the Lebanese town of Arsal, a security source told AFP.

Arsal is a Sunni Muslim enclave in mainly Shiite eastern Lebanon and hosts many Syrian refugees as well as rebel fighters in the surrounding countryside.

It was not immediately clear who carried out the attack.

The US's new coordinator on anti-IS efforts, Brett McGurk, said on Twitter Thursday he was in Ankara "for consultations with senior Turkish officials".